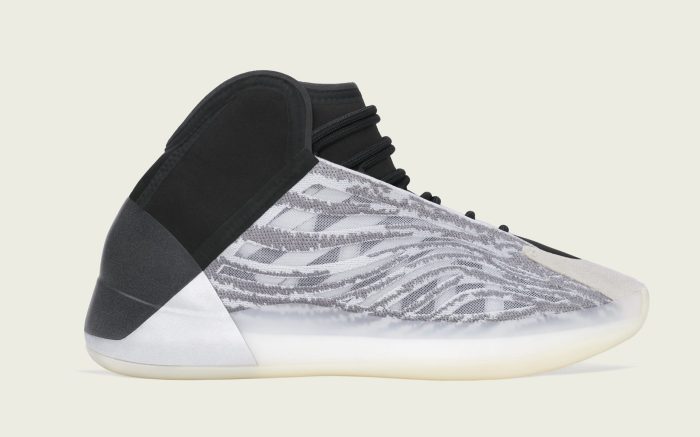 A fan-favorite sneaker from Kanye West’s Adidas Yeezy line is returning to retail shelves this week.

The sportswear giant confirmed today that the Yeezy basketball sneaker dubbed QNTM “Quantum” will be releasing Saturday via the Confirmed app, Adidas.com/Yeezy, Yeezy Supply and at select retailers. The long-awaited launch of the Yeezy basketball shoe happened in February as part of the 2020 NBA All-Star Weekend in West’s home city of Chicago, where he handed out pairs for free from the back of Sherp SUVs.

The Adidas Yeezy QNTM “Quantum” features semi-transparent panels on the sides with wave-like patterns, a suede toe cap and a black reflective heel counter. Capping off the look is a full-length Boost midsole for comfort, while a translucent outsole provides grip.

Unlike its initial drop, the QNTM “Quantum” is releasing in full-family sizing including pairs for adults, kids and infants. Retail pricing is set at $250, $180 and $160, respectively.

It’s also worth mentioning that two versions of the Adidas Yeezy Quantum were created including the BSKTBL and QNTM styles but only the QNTM version is releasing this week. The BSKTBL variation is designed specifically as a performance shoe and the QNTM is for casual wear.

In related Kanye West news, the rapper-tuened-designer said in an interview with Nick Cannon yesterday that he wants Adidas to let him wear Air Jordans.