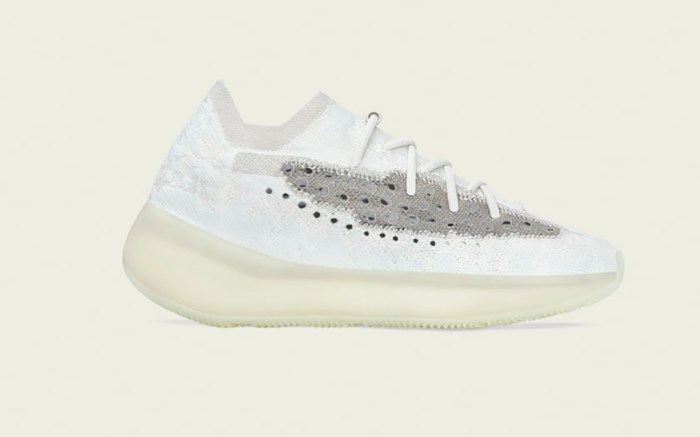 After images of the shoe surfaced in June, Adidas has confirmed the release info for the Yeezy Boost 380 “Calcite Glow.”

The Adidas Yeezy Boost 380 “Calcite Glow” will arrive via Oct. 31 via Adidas.com and on the Adidas app. The sneaker will come with a $250 retail price tag.

Below, check out more images of the highly-anticipated sneaker.

Additional Adidas Yeezy Boost 380 colorways are reportedly on the way.

According to the social media sneaker leak account Yeezy Mafia, the “Hylte Glow” and “Calcite Glow” makeups of the Kanye West-designed lifestyle sneaker will arrive in the fall. The account also revealed that this will be the model’s first two styles to incorporate glow-in-the-dark elements.

The “Hylte Glow” iteration comes with a volt yellow Primeknit upper that’s contrasted by a lime green perforations on the midfoot. A light shade of yellow dresses the collar and laces, while an encapsulated Boost midsole cushions under foot.

The “Calcite Glow” look blends together white and gray shades on the Primeknit upper, while a darker gray hue covers the perforated midfoot and collar. Finishing off the iteration is a full-length gray Boost midsole for comfort.

Adidas has not yet revealed the release dates for the “Hylte Glow” and “Calcite Glow” Yeezy Boost 380s, however Yeezy Mafia stated the shoes will drop in fall ’20 for $230 each.

In related Adidas Yeezy news, the highly-anticipated Yeezy Boost 350 V2 “Zyon” and Yeezy Boost 380 “Blue Oat” will now launch in July after they were initially expected to release this month.

PSA “Out of respect to communities, supporters and partners, these launches have been delayed from June to July: – 350 V2 Zyon – July TBC – 380 Blue Oat – July TBC”