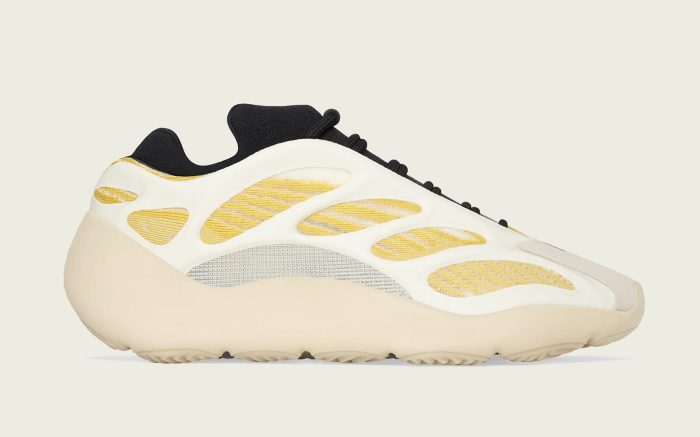 A new colorway of the popular Adidas Yeezy 700 V3 is hitting shelves this week.

The sportswear giant confirmed across its social media platforms that the “Safflower” colorway of the Kanye West-designed lifestyle sneaker is releasing globally this Saturday. However, fans in North America will have to wait until January to buy a pair.

The lifestyle runner is dressed in a white-based Primeknit upper that’s contrasted by yellow stripes running across the sides, while a white TPU shell wraps the knitted material. Adding to the look is a black neoprene tongue and sock liner. Instead of the responsive Boost cushioning that was used on the V1 and V2 versions of the Yeezy 700, the V3 variation opts for EVA foam cushioning instead.

YEEZY 700 V3 SAFFLOWER. AVAILABLE GLOBALLY NOVEMBER 14 AND IN NORTH AMERICA JANUARY 16 AT ADIDAS.COM/YEEZY, ON CONFIRMED IN THE UNITED STATES AND ON THE ADIDAS APP IN SELECT COUNTRIES.

The Adidas Yeezy 700 V3 “Safflower” is releasing in select countries Saturday at select retailers and on the Adidas app.

Fans in North America will be able to pick up a pair at Adidas.com/Yeezy, the Confirmed app and at select Yeezy stockists on Jan. 16, 2021. The shoe will come with a $200 price tag.