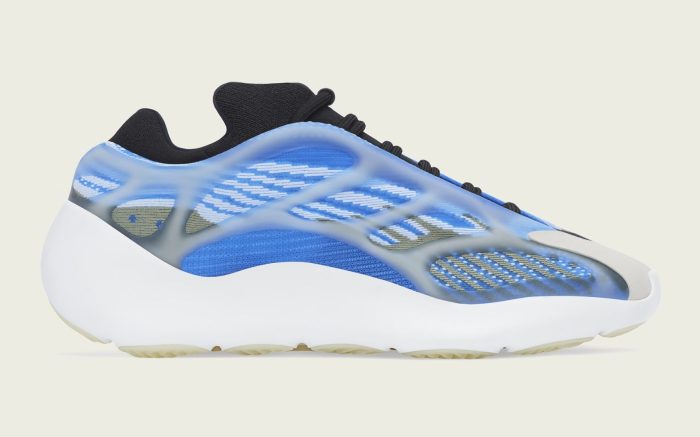 Sneaker fans, listen up because there’s another Adidas Yeezy 700 V3 style hitting shelves this week that you don’t want to miss out on.

Adidas has announced today the “Azareth” iteration of the popular Kanye West-designed shoe will come in a full range of sizes when it releases on Aug. 29. The adults sizing will retail for $200 while the kids sizing will cost $130 and the infant pairs will come with a $100 price tag.

The running-inspired model boasts a breathable Primeknit construction in a vibrant blue hue that’s encapsulated within a clear cage surrounding the sides. Adding a touch of contrast is the use of a black neoprene sockliner along with a gray toe cap. This pair also comes with a new bungee cord lacing system to help wearers achieve a personalized fit. Unlike previous V1 and V1 versions of the Yeezy 700, this silhouette will not feature the brand’s signature Boost cushioning but instead features an EVA midsole providing comfort and durability while the herringbone rubber outsole offers improved traction for all-day wear.

The latest Adidas Yeezy 700 V3 is releasing on Aug. 29 and will be available via the Adidas Confirmed app, Yeezy Supply and at select Yeezy retailers.

In celebration of the late NBA legend Kobe Bryant, here’s a look back at some of the most memorable sneakers from his Adidas signature basketball line before he became a Nike-sponsored athlete.