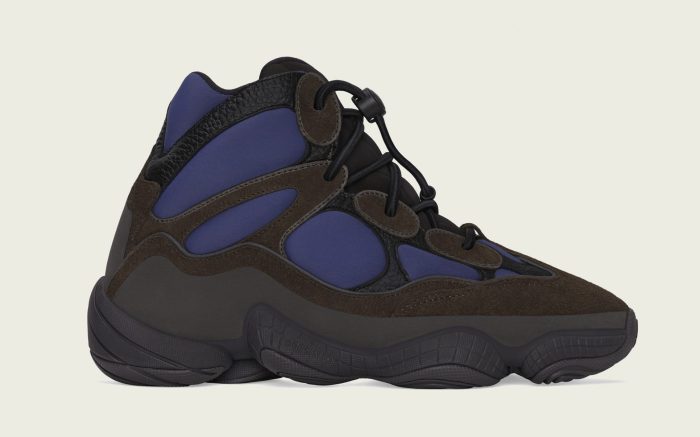 A brand new Adidas Yeezy is headed your way this weekend. The Three Stripes confirmed today the latest Yeezy 500 High “Tyrian” is releasing on May 16.

The “Tyrian” colorway features a navy blue neoprene construction on the high-top upper that’s contrasted by premium tumbled leather and soft suede overlays predominately on the toebox, mudguard, and eye stay. Adding to the look is a black neoprene tongue along with a new toggle lacing system on the laces. The look is finished off with a black tonal adiPrene+ cushioning in the midsole for shock absorption and a sculpted outsole for traction.

The Adidas Yeezy 500 High “Tyrian” is releasing via the Adidas App, Adidas.com/Yeezy, Yeezy Supply, and at select Adidas Yeezy retailers on May 16. The shoe retails for $220.

In related Adidas Yeezy news, two more styles are reportedly releasing this month including the return of the stealthy Yeezy Boost 700 MNVN “Black” on May 23 as well as the release of the new Yeezy Boost 350 V2 “Zyon” arriving on May 30. Both pairs are expected to release on Adidas.com/Yeezy and will retail for $220 each.