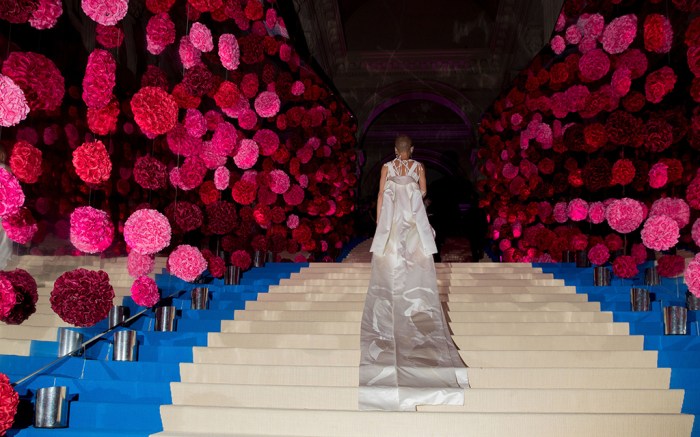 It’s the first Monday in May, and though the annual Met Gala is not taking place, fashion’s biggest night is still being celebrated. Today, hundreds flocked to High Fashion Twitter to post their looks as part of the internet subculture’s virtual version of the Met Gala.

With no association with the Metropolitan Museum of Art or event personnel, the online community of fashion-obsessed Gen-Zers took the opportunity to celebrate the event by allowing anyone to “attend” the #HFMetGala2020. All one had to do is tweet out looks, photosets, illustrations and more with HF Twit’s official layout and the official hashtag: #HFMetGala.

So far, Twitter has been flooded with creative interpretations of this year’s Costume Institute theme: “About Time: Fashion and Duration.” As 2020 marks the 150th anniversary for the Metropolitan Museum of Art, creating a retrospective timeline looking back on decades of fashion seemed most appropriate.

For instance, user @manicvalentino took on the Wardrobe Styling challenge and was inspired by the Victorian era and 1960s mod movement.

About Time: Fashion & Duration. A look that blends the attributes of the Victorian era with that of the 1960’s mod movement – showcasing the beauty of blending historical periods with such differing sensibilities.#HFMetGala2020 @HFMetGala pic.twitter.com/JV4GimTcJP

Many used #HFTMetGala2020 to pay tribute to fashion from other cultures, which are typically not addressed in the mainstream. For @boydedrick, he used the moment to bring attention to African American culture, dressing similar to those in the 1960s Black Panther Party. In the Illustration Expression category, @YaaMazz used a computer to draw a look that features a combination of traditional Ghanaian fabric, called kente, and the court dresses from 18th century France, for instance.

Oftentimes history, fashion & time only recognize a white perspective. In line with this year’s theme, I looked back on fashion history and African American culture and dressed in a similar fashion to the Black Panthers.@HFMetGala #HFMetGala2020 pic.twitter.com/y7P1Izkj5r

#HFMetGala2020 This is my entry for the hf met gala. It’s a combination of traditional Ghanaian fabric known as kente and the court dresses from the 18th century France. I had a lot of fun drawing this in between exam revision and I’m really happy with how it turned out. pic.twitter.com/orNkGSj8Yj

so excited to share my look for the #HFMetGala2020 ✨ pic.twitter.com/uQypmJ3TUl

Tighten your corsets and wear your petticoats for the peacock princess has arrived! 🦚❤

More than pleased to reveal my entry in accordance with this year's High Fashion Met Gala and its theme "About Time: Fashion and Duration". #HFMetGala2020#PILIPINASREPRESENT 🇵🇭 pic.twitter.com/ljhJCzK38a

About Time: Fashion and Duration

While many are looking to the past in honor of the milestone, it’s the future of fashion that’s on everyone’s mind today. And this virtual version of the Met Gala proves inclusivity is front and center.

“The High Fashion Twitter Met seeks to allow the fashion enthusiasts from around the world to share and express their unique and creative visions without real world inhibitions,” the account posted on Twitter. In an age where traditional fashion commentary has become infected by bias and advertisements, high fashion twitter is bridging the gap between brands and the public.”

In fact, the democratic approach to this “party” is refreshing, given the real Met Gala’s celeb-factor and exclusionary vibe. This year, there will be no Best-Dressed lists, and despite having people enter “challenges,” there is no competitive element or judgement on the entries. HFT is giving a voice to a new generation of fashion lovers and using their platform to set the tone to what the industry should aspire to.

#HFMetGala2020 I was inspired by the 70s punk era, all the pieces are handmade by me (also de paintings) Sustainability is the future! @HFMetGala pic.twitter.com/pgj3dhyfAW

I think my @TheDali dress is perfect for this year's gala theme – "About Time: Fashion and Duration."! Dali's take on time…“Give me two hours a day of activity, and I'll take the other twenty-two in dreams.” Dali is both ahead of the times and timeless. #HFMetGala2020 pic.twitter.com/vAEEnGJlfu

About Time: Fashion and Duration

I focused on finding my most timeless silhouette in my wardrobe a callback to the edwardian era and princess diana’s wedding dress with a modern pastel colour palette #HFMetGala2020 pic.twitter.com/3fZxNjlawT

my first challenge for the #HFMetGala2020 is the Brand Challenge for Iris Van Herpen. With this themes connection to Virginia Woolf and her novels themes of flowing time and lack of structure, I found Iris Van Herpen to fit perfectly. pic.twitter.com/WCcuUZ2uKv