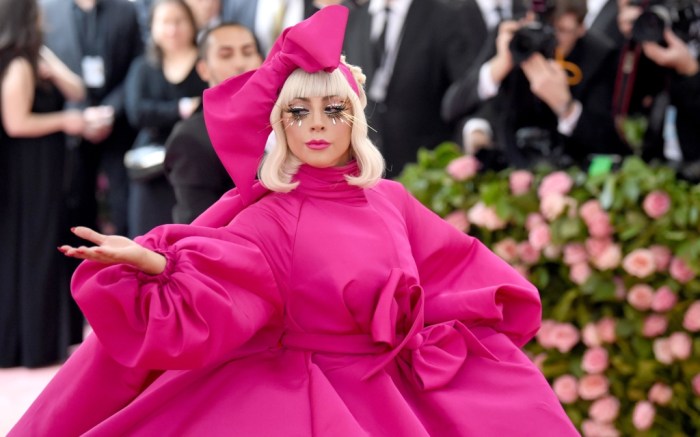 The Met Gala may not be happening today in its usual fashion, but its spirit continues to live on through Vogue and Billy Porter’s #MetGalaChallenge.

The social media challenge encourages people to re-create iconic looks from years past using items from home. The challenge is very apropos given that this year’s costume ball theme is all about time in honor of the Metropolitan Museum of Art’s 150th anniversary.

The challenge for this year’s ball, of which its theme is “About Time: Fashion and Duration,” has sparked a plethora of participants, including Mindy Kaling, who decided to re-create Jared Leto’s Gucci/decapitated head look from last year’s gala.

Recreating one of my favorite Met Gala looks ever with the help of a tarp, some Christmas lights and packing tape. I think Alessandro Michele would approve. Your turn, post your look with #MetGalaChallenge by 5/3 and @voguemagazine will choose select looks to feature on social.

Other fashion moments included re-creations of Rihanna’s looks throughout the years. The musician-turned-fashion-mogul is one star who has had some of the best shoe and style moments at the Met Gala.

The most challenging part about this was I only used poster board, glue, fabric and scissors with no formal training. I still did my best and Bae is proud! @theshaderoom should see this so tag them 😘 Did I mention, it’s still not finished? 🙁😩 . #badgalriri #halloweencostume #MetGala #Fashioncover #manabouttown #fashioneditorial #oscardelarenta #fashiondesigner #fashion #blackgirlmagic #Rihanna #MetGala2017 #MetGala2018 #MetGalaChallenge

Plastic bags, wrapping paper and tape were just some of the materials people used for their looks. Instagram user @sanja_nestorovic_ transformed herself into numerous celebrities including Jennifer Lopez, Emily Ratajowski and Celine Dion using household items.

Concert canceled? @celinedion not the show! We can #stayathome and our hearts will still go on and on. When it comes to @oscardelarenta and #metgalachallenge I’m all about it. What else is there to do but create in these crazy times. Another recycling bag, couple of feathers that took forever to apply, and here we go @voguemagazine @vogue @theellenshow #quarantinecoture #covid_19 @thebillyporter #homegala

Another user re-created Gigi Hadid’s 2018 Versace dress out of leftover Christmas wrapping paper, paint, glue and a pillowcase for the sleeve.

Finished my #metgalachallenge with a wrapping paper dress based on Gigi Hadid’s Versace dress. I added my own headpiece because I have no chill. While it’s not exactly as I’d pictured, I’m really pleased considering it’s made ENTIRELY of last Christmas’ leftover wrapping paper, glue, paint, and a pillowcase for the sleeve. 😄 Thanks @voguemagazine and @theebillyporter for the fun challenge! . . #metgala2020 #metgala #diydress #unconventionalmaterials #paperdress

Other honorable mentions from the #MetGalaChallenge include a handful of looks modeled after last year’s soiree that revolved around the theme “camp.”

i look forward to the fashion of the met gala each year and in honor of it decided to do the #metgalachallenge (and with supplies around my house). i went with @traceeellisross’ 2019 met gala look which was inspired by the art work of lorraine o’grady. o’grady’s “art is . . .” is a collection of photographs in which she used a gold frame to give black people a place in art. #metgala #metgala2020 #traceeellisross #lorraineogrady

Last year, the theme went viral prompting a flurry of memes and online content that lived well on after the Met Gala was over.

When it’s the first Monday in May… 🎀 Well, today would have been the Met Gala but Miss Rona decided to crash that party early. But I’m bored, crafty, and not about to let the festivities pass me by! So please, enjoy my recreation of one of my favorite Met Gala looks, as well as another iconic fashion moment because we had fabric leftover. Couture garments provided by @heftybrands and styled by yours truly, enjoy! 👗 . . . #MetGala #MetGalaChallenge #IFeelLikeItsCouture #NotesOnCamp #YesIUseThisWigForEverything

Although this year won’t have an actual ball, this year’s theme shows just how creative (and expansive) the fashion community can be.