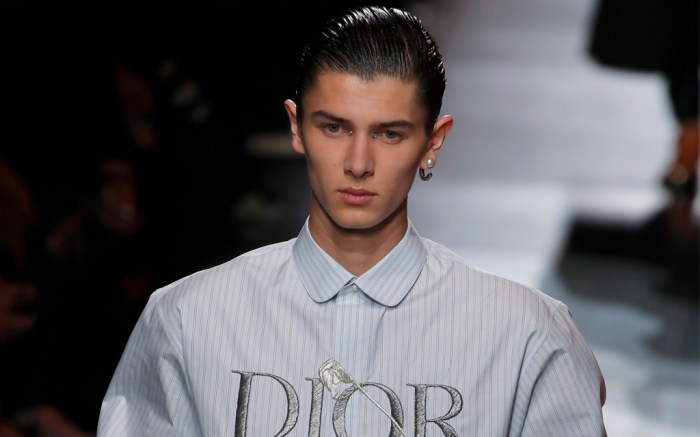 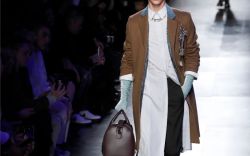 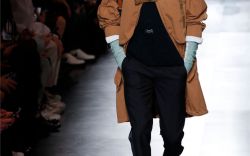 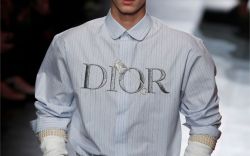 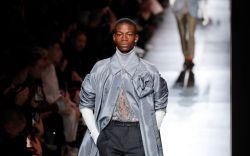 His Dior Men’s show which took place this evening in a monolithic white rectangular box erected in Paris’ Place de Concorde, was announced as a tribute to Jones’ friend, the late Judy Blame, with whom he worked on accessories during his time at Louis Vuitton.

The jeweler and tastemaker was a key player in London’s ‘80s club kid scene, styled celebrities like Neneh Cherry (who also sat front row), Boy George and Bjork, and collaborated with brands such as Comme des Garcons, Marc Jacobs and Moschino.

The Dior logo came pierced with a safety pin, a nod to Blame’s DIY inspired style.

Blame also famously loved a glove and all the looks in the collection were accessorized with opera gloves, lending an elegance to proceedings that were part regal, part glam rock.

These were a perfect foil both for the punky pins and the jewelry designed by Dior collaborator Yoon Ahn, whose Ambush label New Guards Group has just acquired a controlling stake. Her jewelry featured reinterpretation of pieces made by Blame himself.

When it came to his footwear, Jones showed elegant boots cinched with ankle straps. Right now, elevated heels that have been doing the rounds on the men’s fall ’20 circuit might be a step too far for the Dior man. But give it time.

Click through the gallery to see more looks from Dior men’s fall ’20 show.