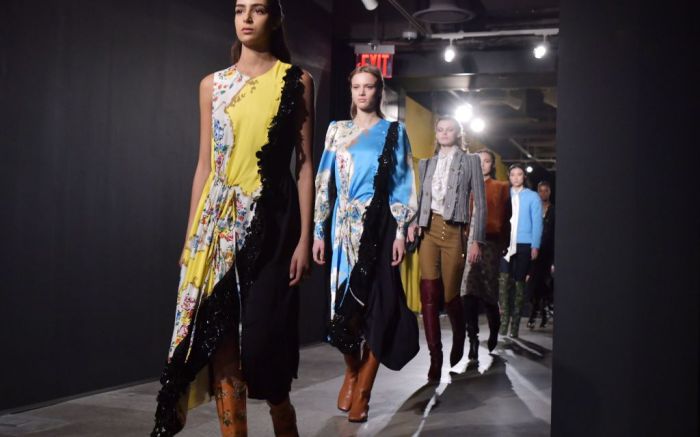 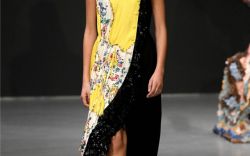 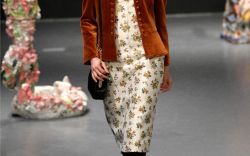 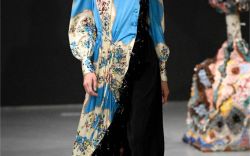 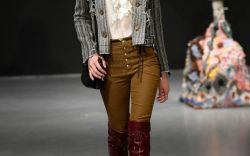 The fall season is often synonymous with boots — it’s the most pragmatic choice of footwear for colder weather, after all. Tory Burch took that practicality to heart at her fall ’20 runway show Sunday morning at New York Fashion Week, without compromising any of her signature poise.

Held in the art galleries at Sotheby’s on New York’s Upper East Side, the show centered around 11 works of art by sculptor Francesca DiMattio, who designed the chinoiserie-like prints that appeared on many of Burch’s pieces, including the flower-embroidered leathers on many of the over-the-knee boots that walked the runway.

The floral boots, in olive green and a burnt-orange-brown, had the same Cuban-Western hybrid style with stacked heels and metal-tipped curved point toes seen in last fall’s collection. There was also a series of tall, flat boots with a tapered square toe, some of them done in black, which was a quiet antidote to the ready-to-wear skirts and dresses featuring DiMattio’s florals. The prints were inspired by Turkish, English and French porcelain traditions.

In the show notes, Burch pointed out the importance of not allowing the work of female artists to disappear, recalling art history classes on Judith Leyster, one of the Dutch Masters (the designer majored in art history at the University of Pennsylvania). Burch emphasized her point by inviting singer Alice Smith to perform hip-hop artist Q-Tip’s version of the 1963 song “You Don’t Own Me.”