Sergio Rossi’s Most Iconic Shoes: A Look Back 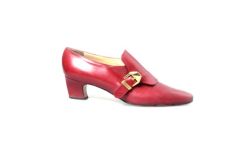 Italy is rife with talented designers and shoemakers — but even among the best of the best, Sergio Rossi’s legacy looms large.

The designer, who died Thursday from coronavirus, was a major influence on the industry, having created some of the most directional and iconic footwear throughout the 20th century.

Like many shoemakers of the day, Rossi learned the business from his father in the 1940s and 1950s, working alongside him in San Mauro Pascoli, a town in the Emilio-Romagna region of the country.

After World War II, the small village became a shoemaking epicenter, known for handmade sandals that were sold along the Italian Riviera. In 1956, Rossi took over his father’s business and started to create his own handmade sandals. “I have always thought of myself as a calzuler, a cobbler, then I became a ‘creative manager.’ I was born among leather… Watching my father at work I stole his trade,” Rossi once said of his formative years. He launched his namesake brand in 1968.

Rossi wasn’t just a cobbler, nor was he merely a “creative manager.” But in his early years, the term designer wasn’t yet a thing — and it didn’t imply the fame and notoriety that it does today. In that time, even Christian Dior was known merely as a dressmaker; and later a real couturier.

But even with his earliest styles, it’s clear that the pioneering Rossi was thinking as a designer. He prioritized shape above all, and a style from the ’60s with a chunky heel and curved buckled detail showed it. In 1966, he debuted the Opanca, a Slavic-inspired sandal with an insole that curved upwards around the foot. With a kitten heel and thin strips of red leather hugging the top of the foot, it was an early model for the sexy, strappy sandal that is so ubiquitous today (it’s also a shoe that his son Gianvito Rossi is well known for).

As both the fashion and footwear industries modernized, Rossi played into shapes like the platform, the pump, the buckle shoe. He followed trends as he continued to expand his business and by the 1980s, his factory was producing more than 1,000 pairs of shoes a day.

But what ultimately distinguished him from his peers was his almost crystal-ball-like perception of the power of collaboration. In the ’70s, Rossi began to partner with Italian designers like Laura Biagiotti, Enrico Coveri and a young Gianni Versace to make shoes for their ready-to-wear collections.

By the ’80s, he was also working with Azzedine Alaïa and Dolce & Gabbana. “I followed designers, rather than advertising,” said Rossi in 2003. “This way the Sergio Rossi brand travelled and became known by the right circles, press, buyers, thus reaching our customers through the advertising photos of the designers with whom I collaborated.”

In 1999, Rossi sold a 70% stake of his company to Gucci Group (now Kering). He stayed on for several years and then retired. After that, the brand went through a handful of designers, which included Brian Atwood, Edmundo Castillo and Francesco Russo.

Instead of tapping another big-name designer, Sciutto turned to Rossi’s vast archives for new inspiration, starting with the SR1 collection, which debuted in for fall ’17. The brand has since built out an on-site library that includes more than 6,000 shoes and accessories and 12,000 historical images and documents that have since been digitized.

Click through to see more of Sergio Rossi’s most iconic shoes through the years.