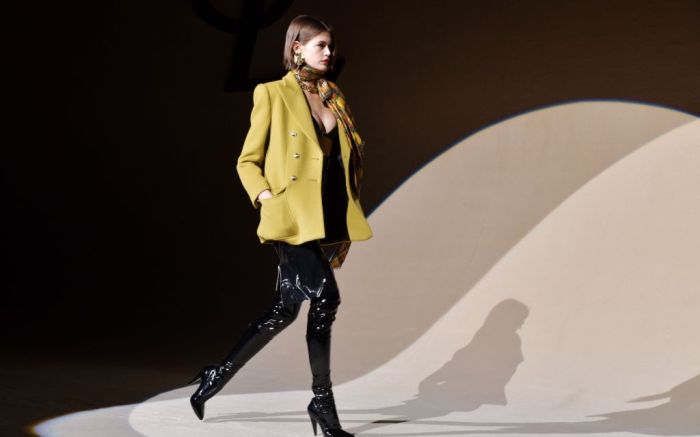 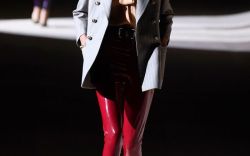 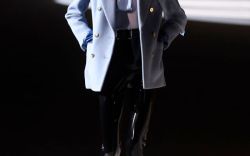 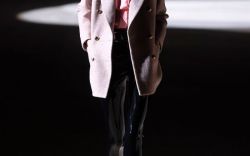 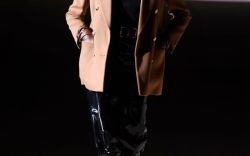 Many actresses have played DC Comics’ infamous Batman love interest-cum-nemesis Catwoman, but Saint Laurent gave the antiheroine a whole new wardrobe for fall ’20, with her signature slick black latex as the background canvas for an entire collection.

Of the 66 looks that walked the runway at the Tuesday night Paris Fashion Week show, all but a few featured the shiny (and surely sweat-inducing) material, whether it was on a Matrix-like black trench, in killer thigh-high black boots (a staple but also a reemerging trend) or in the gobs of supertight, extremely shiny leggings that came in an array of colors. For the record, Catwoman’s costume did not become black until the ’90s; in the ’60s, it was green.

Of course, creative director Anthony Vaccarello didn’t actually cite Catwoman as inspiration. Instead, it was the “bourgeois elegance” of Yves Saint Laurent’s designs from the ’90s. He pulled fabrics from the archives, including houndstooth, panther and polka dots, the last of which were prominent on a classic pair of pumps. “Everything is a matter of tension between discipline and pleasure,” the show notes mused.

The looks didn’t quite evoke the “pleasure” part of that equation. In terms of what’s comfortable to wear, many models were visibly struggling to keep up with the pace of their runway walk in a series of latex pencil skirts, and one wobbled in pumps that dangled with loosely tied velvet bows. The colors, while certainly evocative of ’90s-era YSL and literal in their archival revival, also had a comic book quality. With brand ambassador Zoe Kravitz set to debut her own version of Catwoman this June, perhaps the fashion brand will be putting this latex to further use.