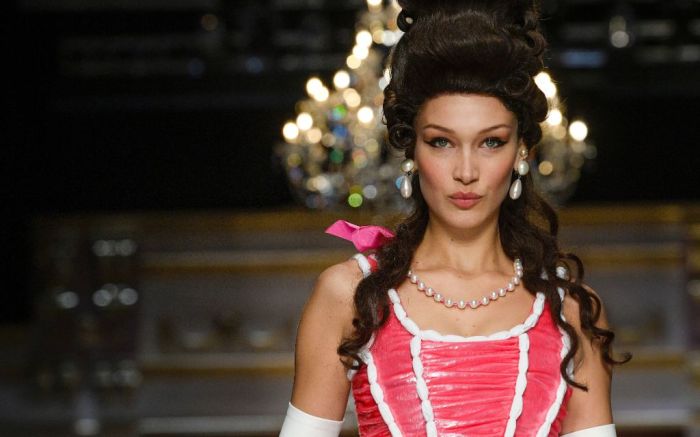 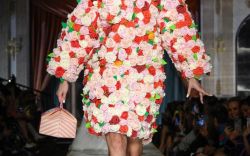 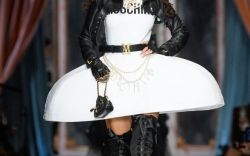 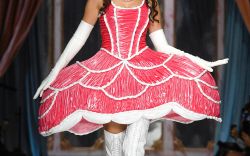 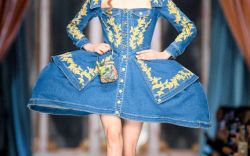 When Moschino’s fall ’20 runway show invitation arrived in the mail, the thick card depicting an elaborate cake clued us in to what might be the collection’s theme. Was it birthday themed? Would Gigi Hadid jump out of a cake?

Not exactly, but creative director Jeremy Scott did not let down a crowd that was anticipating his usual extravagant, campy hijinks, especially after a few rounds of free-flowing sponsored cocktails. Down the mirrored catwalk and under a few baroque crystal chandeliers, models walked in over-the-top looks fit for Versailles — with a Moschino twist, of course.

Scott’s take on the decadent and storied halls of Versailles came through the lens of Sofia Coppola’s 2006 “Marie Antoinette,” a film well known for its Oscar-winning costume design, which included museum-worthy Manolo Blahnik heels and a catchy soundtrack. A few of the film’s songs — like Bow Wow Wow’s “I Want Candy” — played as models walked the runway in elaborate getups that exaggerated the already extravagant styles of the royal courts of 17th-century France.

Both Bella and Gigi Hadid walked in the show, donning gigantic beehive hairdos and gowns with panniers, the side hoops and overskirts that gave Antoinette and her contemporaries their exaggerated skirt volumes. Mom Yolanda Hadid sat in the front row taking videos as the sisters walked wearing mini dresses with panniers, topped with very Moschino leather jackets and logo tees.

Towards the end of the show, Gigi sauntered down the runway in an overcoat made of satin roses, wearing pink lace-up boots and waving around a bag made to look like a Parisian pastry box. Other models carried handbags that looked like macarons and even croissants.

On foot, Scott outfitted his ladies of the court in platform boots with curved cake pedestal heels. Done in candy colors like bubblegum pink and macaron mint, the boots had garterlike lace-up ribbons and a few were even done in toile prints. The platforms were surely a nod to King Louis XIV, who had a propensity for elevated footwear.

For the grand finale, models began to come out in garments that resembled elaborately frosted cakes. A strapless dress on model Joan Smalls had tiers of icing with frosted roses, plus a pair of pastel pink platform pumps that also resembled two very chic slices of cake.