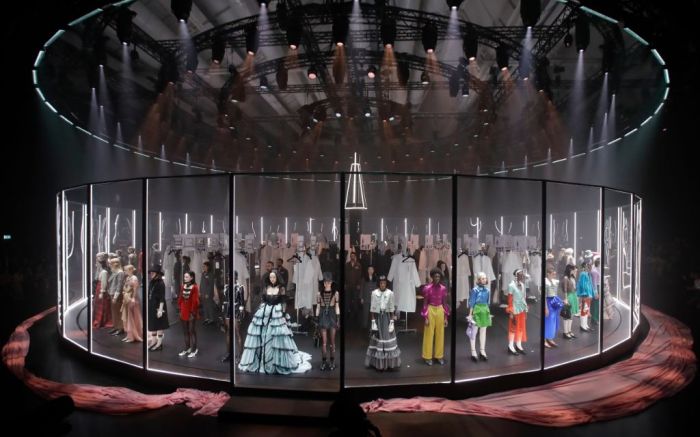 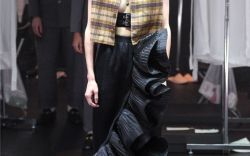 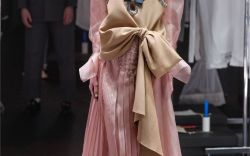 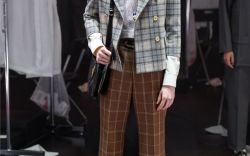 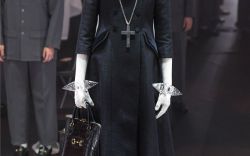 Instagram posts of creepy dolls and carousel horses, plus an invitation via WhatsApp from Alessandro Michele himself, were some of the unconventional ways in which Gucci hinted at its fall ’20 runway show. “A tribute to the fashion circuit: #GucciTheRitual” read one of the posts.

The actual show proved to be both circuitous and ritualistic. Inside the Gucci Hub on the outskirts of Milan, a dark room lit up to reveal a circular rotating platform in which models and dressing assistants stood next to garment racks meticulously organized with the show’s looks. In the next few minutes, they performed the ritual of getting dressed for a fashion show, putting on garments, adjusting them, accessorizing, then readjusting as the carousel turned.

It wasn’t until models were fully dressed and walked to the edge of the carousel that the looks were visible. Michele’s interest in childlike fashion and school uniforms — themes on masculinity that were explored in the men’s fall ‘20 show in January — were still evident, with pinafores and shrunken proportions. The babydoll silhouette may be a micro trend for the year, but with Michele’s approval, it’s likely to take a definitive direction.

Mary Janes seen at the men’s show — and more recently on Harry Styles — were given a more theatrical look with gigantic platforms. White crew socks and knee socks were once again on display, hinting at another possible styling trend to come this year.