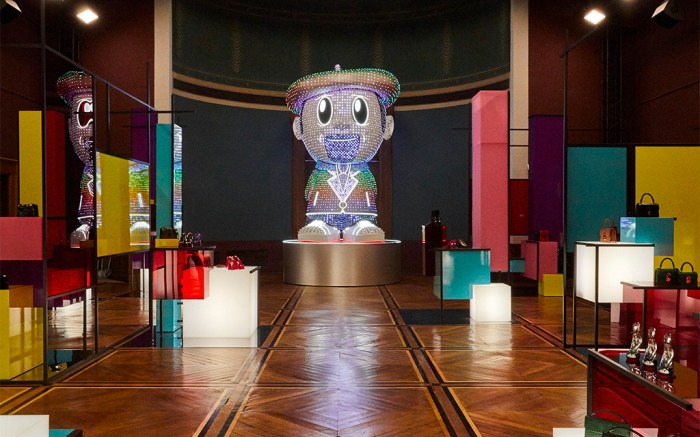 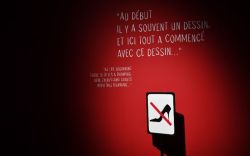 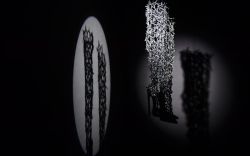 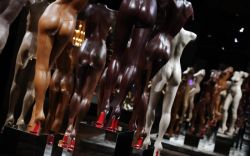 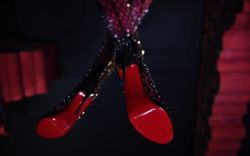 The key themes of Christian Louboutin’s fall ’20 collection included art, a new restraint and the dialogue between womenswear and menswear.

Christian Louboutin is a keen art collector and showcased some pieces from his own personal collection as part of his landmark L’Exhibition[iste] event, which previewed yesterday in Paris. For fall ’20, he insinuated his love of art into the collection via influences and collaborations.

Graphic block-heeled sandals were a nod to Mondrian, while an entire story was devoted to the color black in homage to 100-year-old French artist Pierre Soulages, famous for painting only in black and currently featured in a retrospective at the Louvre museum. Highlights were in hand-done macramé and technical mesh.

Louboutin also collaborated with illustrator Hélène Tran on patent heels and new iterations of the Cabara tote bag, featuring printed interpretations of Parisian scenes. The highlight was for the wearer’s eyes only though: a Perspex strap sandal with a drawing of Louboutin as a leopard printed on the inner sole of each.

Fans of the designer’s more exuberant creations are many, approaching the brand with a quasi-religious zeal, and that was ­much in evidence at last night’s exhibition preview. Eight custom-commissioned stained glass windows evoked the notion by featuring the key tenets of the designer’s work and a giant crystal shoe resting on a silver palanquin (litter) reminiscent of an altarpiece or tabernacle.

It was likewise evidenced by the brand’s collectors, who FN met at the show’s launch party. One woman, wearing custom pumps with butterfly appliqués, confided that she had no idea how many pairs she owned since they were spread over multiple residences. However, she did reveal that her luggage for her weeklong trip to Paris alone contained 35 pairs.

However, alongside color-changing camo prints created via crystals and tiny studded spikes, a more restrained and commercial focus was also palpable. There was a new ultra simple and 100 mm take on the iconic Pigalle with a gentle hourglass heel. Meanwhile suede knee-high boots with a sinuous curve to the upper and bow-back pumps came in a wintry color palette that was both subtle and subdued.

Similarly, the brand has evolved its dialogue between womenswear and menswear. The Cuban-heeled biker boots and flat studded sandals shown for men’s fall ’20 have been added to the women’s collection as well. Elsewhere, classic loafers came in a pinstripe canvas and fully functional pin-lock detail snaffle.

As for the all-important staging for which the house is also known, that came in figurative form. Holding court over proceedings was a towering digital rendering of the legendary designer featuring thousands of tiny LED lights and wearing his classic Louis sneakers, complete with studded toe caps. Dubbed Super Loubi, the figure had been created by the talented in-house production team.