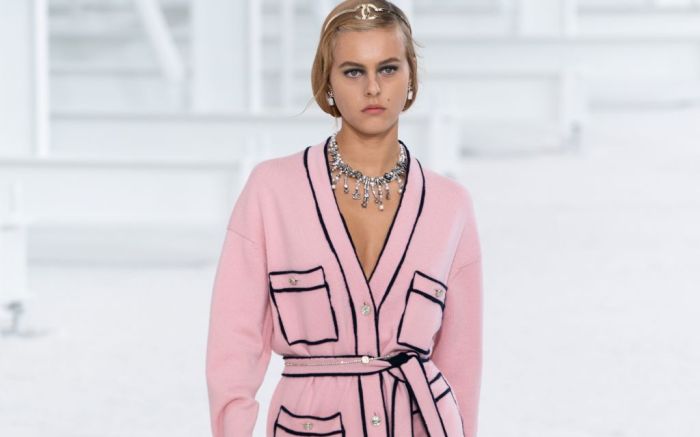 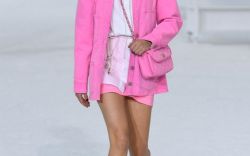 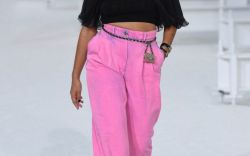 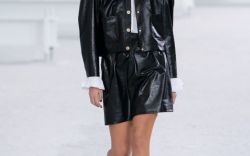 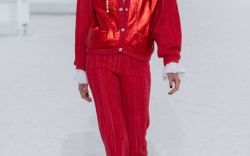 It was clear that Chanel’s spring ’21 show would have something to do with Hollywood and the movies. The day before the show, the brand released a teaser, filmed by photographer duo Inez & Vinoodh, showing a replica of the famous Hollywood sign done in “CHANEL,” along with a series of dramatic vignettes in which models-as-actresses performed recurring cinematic situations.

Fast forward a day, and the Grand Palais was filled with those giant iconic letters done in white. Models walked out from them wearing a series of black, white and bubblegum pink looks, Chanel style. While it may not have been the explicit intent of Chanel creative director Virginie Viard, the collection looks primed for a “Legally Blonde” comeback.

Campy as the films may be (a stark contrast from the seriousness of the models walking the runway), it’s difficult not to imagine Reese Witherspoon’s Elle Woods in some of these looks.

“I was thinking about actresses at the photo call, on the red carpet, that moment when they’re being called to by the photographer,” Viard said in the show notes. “This collection is a tribute to the muses of the House. Some of them are far away, it’s been a long time since we saw them. Gabrielle Chanel and Karl Lagerfeld dressed so many actresses in films and in real life. I was thinking about them who make us dream so much. But without wanting to replicate. Without falling into a vintage citation. I wanted it to be very joyful, colorful, and very vibrant too.”

The inspiration feels primed for a loose interpretation — after all, fans of the early aughts film franchise have been waiting for a supposed threequel for nearly two decades now. In August, Netflix’s new Reese Witherspoon-produced series “Get Organized With The Home Edit” featured a re-do of a memorabilia closet in the actress’s Nashville home. It came complete with the full wardrobe from both “Legally Blonde” and “Legally Blonde 2,” including a Chanel-like skirt suit that Elle Woods wore to Washington — and the 77 pairs of shoes that she got to keep from the sequel.

Apart from its cinematic references (and all the pink looks), the collection in and of itself was a much more cohesive showing than the past few seasons with Viard at the helm. Separates had an individual allure, the footwear glam but relatable (kitten heels and T-strap sandals in a gold-and-back palette). Chanel’s hit mini belt bags got even more miniature (less a functional bag, more decorum) and there were more of the novelty accessories and accoutrements that the brand’s fans look forward to with each collection.

Viard alluded to her predecessors for the inspiration, but one announcement made clear that she was definitively looking to the future:  This was the last show for Chanel at the Grand Palais, a Paris location and monument that has served as the setting for countless runways and fantastical set designs. Next season, Viard will hold Chanel’s show elsewhere.