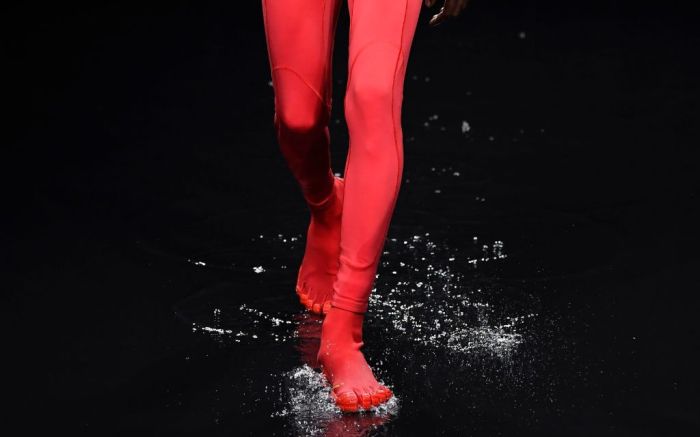 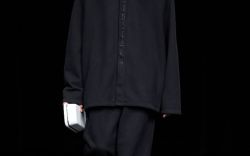 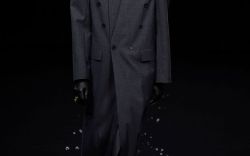 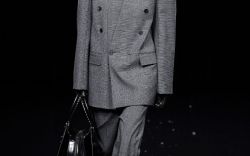 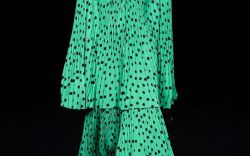 Water flooded the runway and even seeped over the chairs of the Cité du Cinema studio complex in Paris, as models waded through it all.

But it was all intentional. Under an otherworldly and, yes, apocalyptic LED screen depicting lightning storms and other frightening weather patterns, Balenciaga showed its fall ’20 collection on Sunday at Paris Fashion Week in a setting that was equally as dramatic as the looks — and one that certainly reminded its attendees of the terror of climate change.

Inside the venue, the brand added additional chairs and then intentionally flooded the floor with water to give the setting a natural disaster theme. (It also reportedly pledged to give the water back to the city to reuse, the chairs being donated to a children’s sports center.)

As for the actual fashion, creative director Demna Gvasalia presented more of his sharp-shouldered tailoring, primary coloring and athletic-wear infusions. The biggest advance came from technical-focused sportswear for men:  There were stretchy, formfitting base layers in blue and red. Otherwise, of the 105 looks, a majority were done in all black.

The flooded runway made it difficult to see footwear, but a closer look revealed that models were even wearing matching water socks.

Elsewhere, Gvasalia showed the same sort of sharp stilettos and boots that he’s displayed in previous collections. Some of them appeared to utilize tights over stilettos, a styling technique he employed for the fall ’18 collection.