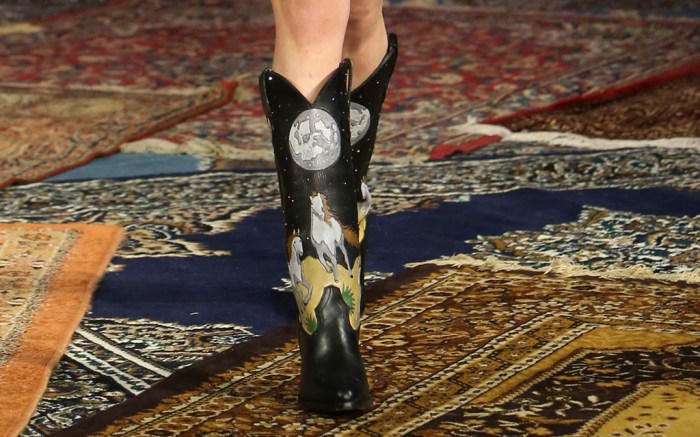 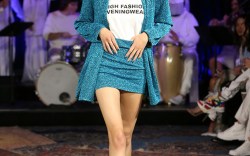 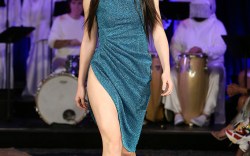 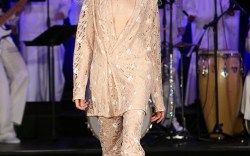 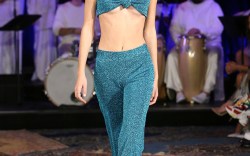 Baja East showcased its fall 2020 line on Friday in L.A., a retro-inspired collection with glamorous pieces and an elevated twist on the laidback California-cool aesthetic set to the soundtrack of disco tunes and a live band. Along with the sequins, sheer paneling and sleek sweatsuits, the accessories added a Western-inspired element, subtly conveying an ode to Americana through the headwear and footwear choices.

Founder Scott Studenberg told FN backstage that he describes the aesthetic as “desert disco drag” with “a little tribute to Selena (Quintanillia) because she was obsessed with this.”  The collection’s debut also revealed collaborations with Brother Vellies on boots and Gigi Burris on hats.

After meeting at the Vogue CFDA Fashion Fund, Studenberg and designer Aurora James, founder of Brother Vellies, saw how their visions aligned and decided to work on cowboy boots for the Baja East collection. Studenberg said he approached her about collaborating on her “doodle boots” in which, James, essentially, “does little drawings all over [the shoes].” For this iteration, Studenberg was inspired to re-create Southern California’s Joshua Tree desert landscape on her shoes. “It’s just super-grounding and beautiful,” he explained. “You can just go be creative there and not be around everything.”

The shoes were all hand-painted using Studenberg’s sketched designs. The boots are quite the fashion statement, with the exclusive collection featuring Swarovski crystals as well as fringe in both off-white and black colorways.

The designer added that the shoes, as well as the hats created with Gigi Burris, will be for sale and available on the brand’s website.

Studenberg was feted by some of his famous fans on the front row, including Ashlee Simpson and Evan Ross, Paula Abdul and Sophia Bush, who described the collection simply as “Beyond” while FN was backstage.

Abdul said she was impressed by the eye candy embellishments. “There’s a lot of sparkly fringe and everything about all the accessories, even the rhinestones on the skin,” she shared, adding that she finds his designs flattering on her “slightly vertically challenged” 5-foot petite frame.

“RuPaul’s Drag Race” star Valentina said “it was giving me a rodeo, cowgirl” inspiration. “I loved all the elements of sparkle with the makeup,” she said of the models, who had crystals adorned on their faces. “I’m a drag queen, sparkling girl, so when they pulled out crystals on everything, I was like, ‘yeah!'”