Exclusive: Cardi B on Why Winning Is So Addicting After She ‘Lost So Much’ 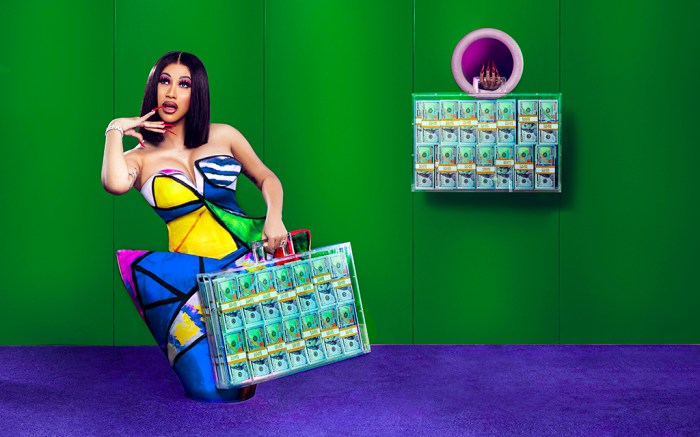 “I’m such an ambitious person. I feel like I lost so much. Now that I’m winning, it’s a very addicting feeling.”

It’s midnight in Los Angeles, and Cardi B is all business at FN’s exclusive shoot.

Her meticulous attention to detail is evident as she focuses her gaze directly on the monitor after each click. It’s only fitting that Rihanna’s “Bitch Better Have My Money” bumps in the background on set at Penske Media headquarters in late October.

The pace is intense. Over the span of 12 hours, Cardi has taken a COVID-19 test (along with the entire crew), modeled four different outfits and two hairstyles — and balanced on top of an apple box in sky-high platforms even though she’s afraid of heights. And the evening’s not even close to being over.

Cardi B, whose real name is Belcalis Almánzar, is heading into the studio — likely to work on her highly anticipated second album — where she’ll wrap up her work day at 5 a.m. Then it’s back to mom duty with her mini-me, 2-year-old daughter Kulture. It’s a grueling schedule, but one Cardi seems to relish as she plots her next move.

“I can go to sleep with the No. 1 record, but I’m going to sleep and thinking, ‘I need my other album to go No. 1.’ My sneaker sold out so fast; I need my next sneaker to sell out. I always wonder if I’m going to be satisfied,” she says.

With that insatiable hunger to win, Cardi B is ready to make her first major foray into the shoe industry with the Nov. 13 debut of her Club C sneaker collection with Reebok. (She gave fans a taste during a limited drop last month and on Sunday when she unveiled her special Reebok product packaging.)

As she kicks off the important new project, Cardi B’s star continues to rise — even as a pandemic upends every aspect of her life and work. Her singular voice resonated strongly in 2020, from her viral Instagram rant about coronavirus to her controversial, raunchy-meets-empowering single “WAP.” Not only did the song hit No. 1 on the Billboard Hot 100 chart when it was released in August, but it also broke a record in its first week of release, drawing 93 million U.S. streams within six days. Cardi B’s global appeal was evidenced by her striking Balenciaga fall ’20 ad campaign — her first luxury play — which was splashed on a giant billboard outside the Louvre in Paris in September.

This year, the outspoken star also took on another important role — as a stirring political advocate for Democrats and President-elect Joe Biden. (She also served as a 2020 Census spokesperson.) On Instagram, fans soaked up her unvarnished take on subjects ranging from Donald Trump to sex. While this intentionally divisive approach could ruin some careers, it only seems to be boosting hers. After Biden beat Trump in the 2020 election, “WAP” became a celebratory anthem for revelers outside the White House on Saturday.

“Cardi B’s edge is rooted in what every single person in the Gen Z segment seeks: truth,” said Marc Beckman, CEO of advertising and representation agency DMA United. “Like her or not, she leaves it all on the field, in every single way — pimples, hidden skeletons, everything. Unlike most celebrities, Cardi B’s candor brings her base a relatable persona, with fashion influence and, in turn, sales.”

For executives at Boston-based Reebok, her attitude is a key part of the Cardi B package.

“She exudes this idea of confidence. That level of belief in yourself and that openness to be exactly who you are and not succumb to any pressures from the outside. Everyone can look and admire that, and then having a line and a piece of footwear that represents that is an incredibly strong draw,” said Caroline Machen, Reebok’s global VP of marketing.

Despite her track record for success, Cardi remains focused on staying ahead of the pack. She’s steadfast in establishing herself as a power player, though she has some stiff competition: herself.

“I’m very hard on myself,” she said. “I’m hard on my entire team. We don’t focus on nobody else, we are just focusing on our last — the last music video, the last collaboration, we always compare it to our last best. We want to do better and better. When I do something positive and when I see my things selling out or my record doing pretty good, I get this crazy rush of happiness, but then it’s this rush of overwhelmingness that makes me want more [and] want more.”

Since “Bodak Yellow” hit the airwaves in 2017, Cardi B has been in the fast lane. Her rags-to-riches Cinderella story, as a former stripper living in the Bronx, N.Y., is no longer the only narrative that everybody’s talking about. Her debut and only album, “Invasion of Privacy,” made her a triple-platinum-selling Grammy winner, for example.

It’s clear she is here to stay, and now she aims to cement her status as a business mogul through her latest Reebok partnership.

Cardi has been working with the brand since 2018 starring in ad campaigns. Design was the clear trajectory. The footwear collection has been in the works for nearly a year, and it is Cardi’s take on the classic Club C silhouette. She was heavily involved in the line, which features two styles — the Club C Cardi ($100) and the Cardi Coated Club C Double ($80) — in three different colorways that are available in both women’s and children’s sizing. (She’s posted matching looks with Kulture on Instagram already).

“This has been a huge labor of love,” said Machen. “As a footwear design-driven company, we are always pushing our design elements, and when you have a talent like Cardi, who has this amazing creative mind and vision, of course it made sense to bring those two together. It was the perfect melding.”

To tease the launch, Cardi released limited pairs of one colorway of her Reebok shoe in celebration of her Oct. 11 birthday, and it sold out in 18 hours. According to marketing platform Launchmetrics, her one Instagram post promoting the drop generated a total of $1.7 million worth of Media Impact Value.

The data is telling as Cardi’s creditability has been recently questioned on social media. In late October, she was caught in a debate on whether or not her love of Hermès Birkin bags (an expensive habit her husband, Migos rapper Offset, put her on to, she told FN) is devaluing the luxury product.

“Why is it that you’re asking female rappers if they could get a bag from the Hermès stores? You don’t do this to these white celebrities. … Another thing they are saying is we depreciate the value. In hip-hop, when we mention brands, their shit goes up,” she posted in an Instagram video addressing the critics. She added that after she rapped, “I like those Balenciagas, the ones that look like socks” in the “I Like It Like That” song, Balenciaga sales went up and that’s the reason why the label worked with her this year.

Cardi has already proven she can move merch in the fast-fashion space and at a time when it’s becoming more difficult for celebrities to break into a highly competitive industry.

Richard Saghian, CEO of Fashion Nova, worked with Cardi early in her career, adding that the two capsule collections from their 2018 and 2019 collaborations, featuring dresses, tops, bodysuits and more clothing under $100, sold out immediately. “Part of what drew us to Cardi is her bold, confident and unapologetic personality, which is reflected in her style. There is an openness about her that fans love and relate to, so it’s no surprise that people want to emulate her look,” he said.

Her social media reach also adds to her allure for brands. According to a Social Studies Intelligence Report, her Instagram following grew nearly 50% over the past year, adding more than 25 million followers for a total of 77.8 million. During a single week in October, she had 40.82 million interactions spanning only 11 posts.

Social media is a Catch-22, however. It’s the beast that launched her into the spotlight before music stardom and now it’s the petri dish for cancel culture that comes for her on a daily basis.

She’s no stranger to Internet trolls and criticism, but now she understands that there’s much more to lose.

“It’s hard. There’s a lot that I want to keep to myself when it comes to my personal life, but sometimes people get an inch of my personal life and they start with the rumors. I feel like I’m going to shut it down and address it. That’s always been my issue,” she said. “Nowadays, you cannot even be real because if you don’t have the ‘popular answer,’ then it’s the wrong answer and it could just jeopardize so many things, which is sad because I want to speak my shit. I want to be putting so many people in their place. There’s so many people that just have the most miserable comments and they want you to feel miserable with them. It’s so hard. My realness bothers them, [but] I don’t give a damn.”

Neither does Reebok. Pushing boundaries has been the company’s M.O. since the 1980s, when it launched the Freestyle, and it’s what they are betting on to be the winning formula in a saturated market of celebrity collabs.

Other artists have been making big plays in fashion for years, but only few have reached the status of Rihanna’s Fenty or Kanye West’s Yeezy lines.

“It boils down to two pieces: authenticity and shared values,” said Machen, about the ingredients for a successful partnership. “It can’t feel forced. Who Cardi is and what her fans love about her — those are the same values Reebok has. And then, it’s accepting and bringing that [message] forward into product.”

Aside from bold style, what was most important for the rapper with this collaboration was attainability.

“I remember when Reebok came out with hot-pink, neon-green styles, and I wanted them so bad, but I couldn’t afford them. My mom, she used to work and only wear black OG Reeboks, and that’s all she wore. She’d wear the same pair for like three years,” Cardi remembered. “Affordability is No. 1. I know where [my fans] stand. I wanted to make something so affordable so that they could have a piece of me. I always make sure it’s affordable even when it comes to my OnlyFans, my merch. I always say to keep in mind the price. These are my fans, I don’t want to be taxing my fans.”

Back on set, the clock strikes 12 and Cardi is pondering one last question: What is this all for?

“It’s for me. It’s for my kid as well, but it’s for me,” she said making a point with her hands, complete with her signature, long red nails. “It’s something I can stand on. Like, I did this, I did that. I always say I love making money and it’s for the money, but it’s just not even about the money anymore. The money is always going to come. It’s about the high you feel when you accomplish something. People will try to rob that from you, bring up your past or your flaws, but it’s like, I don’t care because you can’t take away what I did. And I know my daughter is going to be like, ‘My mommy did this though. Yeah, what your mom did?’

Click through the gallery to see more the exclusive Cardi B shoot.