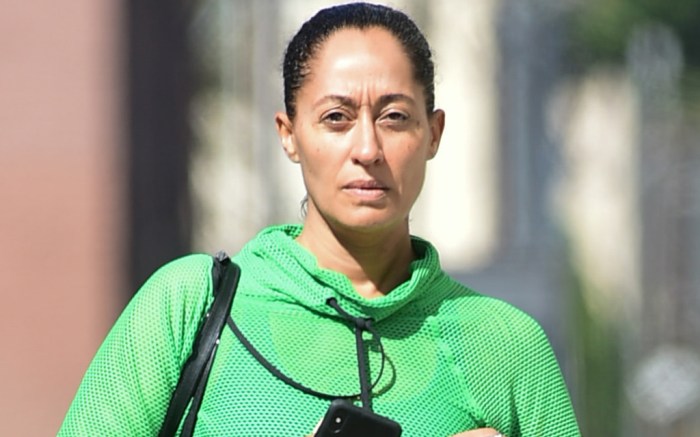 The “Black-Ish” actress took to Instagram this weekend to reassure her millions of followers that she is still working out and “still cussing up a storm” with a video of her latest fitness session. The star opted for an unmissable neon yellow sports bra and leggings set for the clip, strapping on a set of ankle weights as well as she took on a celeb-favorited Tracy Anderson Method routine.

Ellis Ross then continued the bright theme of her workout ensemble with a set of white athletic sneakers with a DayGlo yellow outsole and heel counter.

and still cussing up a storm (sorry mom). @tracyandersonmethod

Throughout her time in quarantine, the “Girlfriends” alumna has used social media as an outlet to connect with her fans about the film and about everyday life. And even as lockdown measures have eased, the star has continued to give glimpses into behind-the-scenes style moments from her TV series, as well as real-time looks at her home life and workouts, such as yesterday’s video.

Makin this sh*t work. Thank you Quinn for bearing with my antics @heartandhustlegym

Her at-home looks have also included a few impressive pairs of lifestyle sneakers in addition to running shoes. Her footwear collection includes designs like Travis Scott x Air Jordan collaborative pairs as well as red and pink Nike sneakers that she said she purchased from resale site GOAT.

Tracee x Karla is back in business! I had to go to a “thing” and wanted to be chic but COVID safe, so @karlawelchstylist threw this gorgeous @therow suit over the wall; then I grabbed this fabulous @gucci bag that they gifted to me (haven’t used a purse in 5 months), a little sexy bodysuit courtesy of @samiranasr, and one of the very few purchases I made during the pandemic: these fancy little @nike sneakers from @goat ! @yashuasimmons has requested beauty deets: mascara, clean and moisturized skin, @maccosmetics #embraceme lip pencil. Slicked back braided bun using @patternbeauty leave-in conditioner and strong hold gel…all done by little ol me.

Pool party! Except I don’t have a pool. And I’m too scared to have a party 🤷🏾‍♀️😂 Siri play “Summertime” by DJ Jazzy Jeff & The Fresh Prince

As a modern style icon, Ross’ closet isn’t lacking in designer labels. Some of the luxe brands in her collection include Christopher John Rogers, Loewe and Christian Louboutin. She also has starred in campaigns for Kenzo’s spring ’17 collection alongside Jessie Williams of “Grey’s Anatomy.”

Click through the gallery to discover more of Tracee Ellis Ross’ best style moments ever.