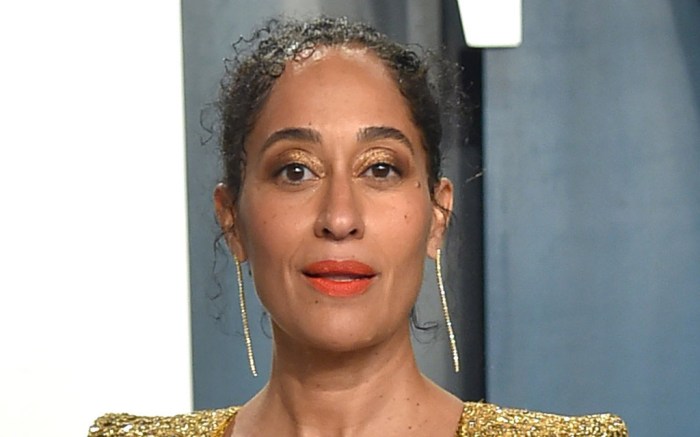 Tracee Ellis Ross brought her signature flair and dramatic appeal with her look for an episode of “Jimmy Kimmel Live!” last night.

The “Black-Ish” star made an appearance on the late-night talk show as her ABC series returned for a new season earlier this week. For the occasion, Ellis Ross pulled out all the stops with her outfit, teaming a voluminous set of black Loewe pants with a coordinating satin tuxedo blazer. The standout number of course came with even bolder earrings and a sleek set of heels.

The red-bottom pumps came from none other than Christian Louboutin and featured a shining patent leather upper. The French label’s Kate silhouette comes with a pointed-toe front and a low-dipping vamp, exposing the tops of the toes and flattering the foot. Set atop a 4-inch stiletto heel, the pair can be found for $695 at Net-a-Porter.com.

Ellis Ross is no stranger to bold looks and wow-worthy pieces. Just a day before her late-night appearance, the “High Note” actress took a trip to Ulta in an unexpectedly glam look, opting for a blue velvet and corduroy blazer and pants set as she checked out the stock of her own Pattern Beauty line.

As for footwear, it was the Pyer Moss by Kerby Jean-Raymond Sculpt 1 sneaker that dropped on Oct. 3 for the actress; the shoe serves as the brand’s first-ever shoe under its individual label — the brand has previously collaborated on a series of footwear silhouettes with Reebok.

The unique design features a chunky midsole coated in an unmissable yellow shell layered atop a mixed material white upper. The now sold-out Pyer Moss Sculpt 1 released for $595 in a black and yellow colorway; while the white iteration has yet to hit shelves, you can still shop its darker counterpart for $700 to $800 on resale site StockX.com.

Found a mask to match my kicks. Thank you @kerbito @pyermoss for these fly ass otherworldly shoes.

Throughout her time in quarantine, the “Girlfriends” star has used social media as an outlet to connect with her fans about her series and about everyday life. And even as lockdown measures have eased, the star has continued to give glimpses into behind-the-scenes style moments from her TV series, as well as real-time looks at her home life and workouts.

As a modern style icon, her closet isn’t lacking in designer labels. Some of the luxe brands in her collection include Christopher John Rogers, Loewe and Christian Louboutin. She also has starred in campaigns for Kenzo’s spring ’17 collection alongside Jessie Williams of “Grey’s Anatomy.”

No matter the occasion, a glam footwear moment is always a yes from us. Try out Tracee Ellis Ross’ style of shoe with these next patent heels.

Flip through the gallery to have a look at more of Tracee Ellis Ross’ best glam moments over the years.