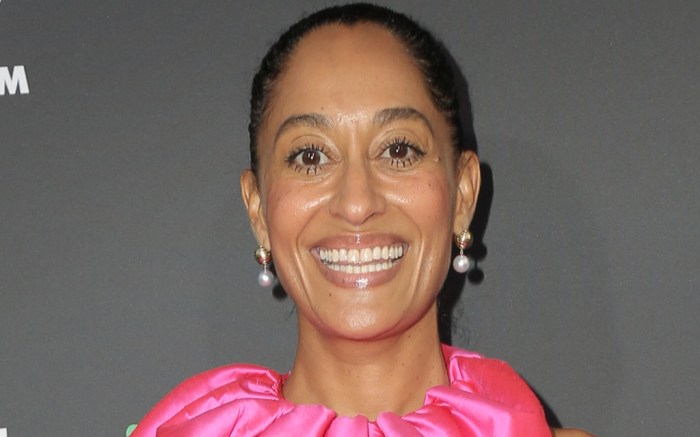 What We Originally Reported:

Tracee Ellis Ross is set to serve as tonight’s host for the second day of the virtual 2020 Democratic National Convention.

The “Black-Ish” actress announced the news of her hosting the convention on Twitter on Monday, writing: “Excited to facilitate tomorrow night’s #DemConvention!”

Ellis Ross’ hosting career extends beyond the Democratic National Convention and into the fashion world. At the end of 2019, the actress helped run the British Fashion Awards, modeling a mix of designer labels for the event including an Erdem cape dress, a glittering Gucci gown and even a Dior Men’s suit matched to glittering Jimmy Choo pumps.

Before her time on the Fashion Awards stage, Ross served as the host for two years running at the American Music Awards. In 2018, one of her outfits paralleled motifs from tonight’s event as she teamed a red voluminous skirt with a T-shirt reading “I Am a Voter.” Additionally, the “High Note” actress opted for a dramatic Gucci cape to cover her sequined jumpsuit and Nike Air Force 1 ’07 sneakers at the show.

In 2017 as well, the unmissable outfits continued with Ross’ choice of a disco ball-inspired fringe gown from Paco Rabanne with icy blue Lisa Eisner jewelry and equally as metallic silver sandals.

As a modern style icon, Ross’ everyday closet isn’t lacking in designer labels. Some of the luxe brands in her collection include Christopher John Rogers, Loewe and Christian Louboutin. She also has starred in campaigns for Kenzo’s spring ’17 collection alongside Jessie Williams of “Grey’s Anatomy.”

For more of Tracee Ellis Ross’ best glam moments over the years, click through the gallery now.