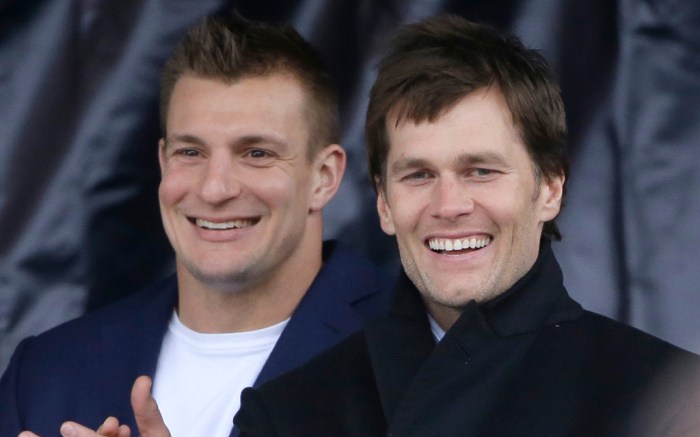 Tom Brady welcomed his former teammate to his new team yesterday in a humorous way.

As Brady stands outside in a ball cap, sweater, sweatpants, he covered his feet by slipping a set of plain white socks into black-and-white Under Armour slides, which are now on sale at Belk.com for $27, instead of the original asking price of $35. (Brady became a brand ambassador for Under Armour in 2010.)

Heeding the call, Gronkowski then comes running out of the woods in a white V-neck T-shirt, shorts layered over black leggings and white Nike sneakers. The tight end, who retired from football in spring 2019, runs to Brady and, with his chest heaving, says, “A little tired, but Gronk reporting.”

Time to run it back Gronky!

The news of Gronk’s return to the NFL caught fans by surprise this week.

With one year left on his contract, he was traded by the Patriots to the Buccaneers. That followed Brady’s move to Tampa Bay this offseason, after the end of his own contract with New England. Together, Gronkowski and Brady played nine seasons together under coach Bill Belichick, earning three Super Bowl rings in 2014, 2016 and 2018, though the tight end sat out the 2016 championship matchup against the Atlanta Falcons due to an injury.

In addition to his sponsorship deal with Under Armour, Brady has partnerships with Molecule Mattresses, trading card company Upper Deck, Aston Martin and IWC watches. In the footwear and apparel space, Brady has also worked with well-known brands such as Ugg and Foot Locker.

Gronkowski does not lack in sponsors either, having joined forces in the past with Nike, Dunkin’ Donuts, Tide, JetBlue and Monster Energy drinks.

For more slides just like Brady’s pick, check out these black and white pairs.

Click through the gallery to see more of Tom Brady’s effortlessly dapper style.