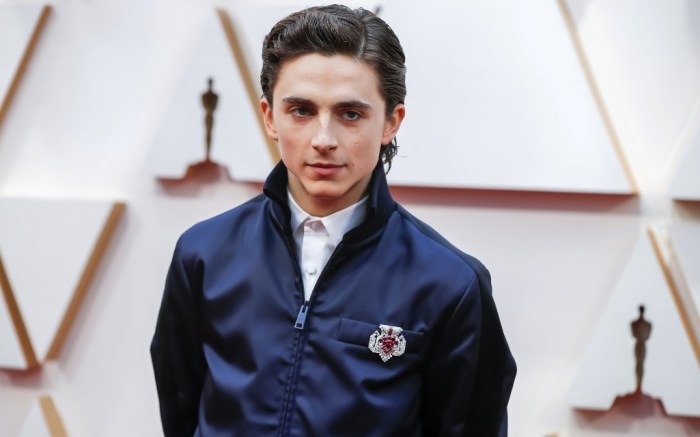 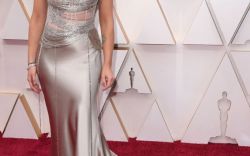 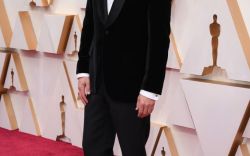 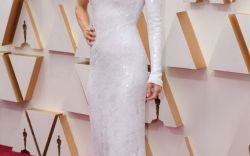 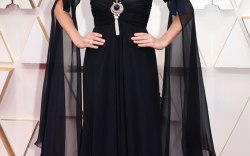 The 24-year-old “Call Me by Your Name” star, who presented the award for best adapted screenplay alongside Natalie Portman, turned heads as he posed for the cameras in a sporty navy satin Prada suit with a white shirt and a pair of chunky black patent leather ankle boots.

The jacket featured black accents, a popped collar and zipper closure in lieu of buttons. Meanwhile, the trousers were designed with a stretchy ribbed trim. He pulled the look together with a white gold, ruby, diamond, and platinum Cartier brooch.

But Twitter has been having some fun roasting his attire, comparing him to a gas station attendant, a bell boy, a valet and so on. “Congrats Timothée Chalamet for his promotion to gas station manager,” one tweet read.

Another user quipped, “he looks like a serial killer valet.” Meanwhile, another user compared him to Milo Ventimiglia’s character Jess from “Gilmore Girls.”

Timothée Chalamet looks like a mashup between a ghostbuster & 1930s Boy Scout. Investigating the paranormal or selling me thin mints?? pic.twitter.com/pld4bUmBps

#TimotheeChalamet’s #oscars outfit is so underwhelming. He looks like a serial killer valet. pic.twitter.com/2v1ErH88AD

Why is Timothee Chalamet dressed like he's a bell boy at an Illuminati hotel pic.twitter.com/TSoap2RVlw

Check out more fashion people are talking about from the 92nd annual Academy Awards.