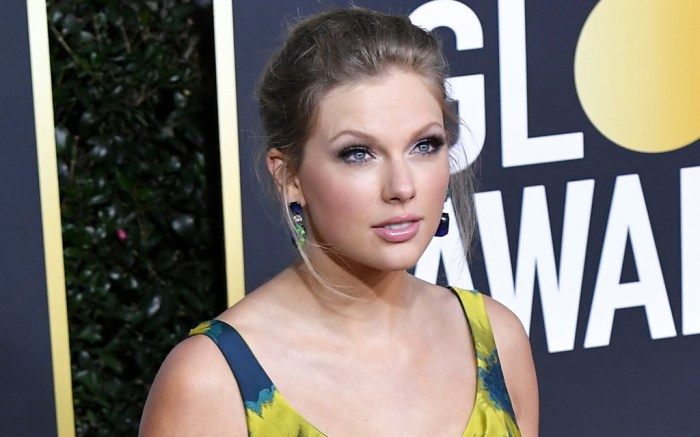 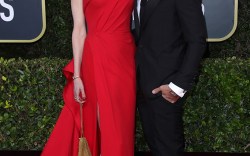 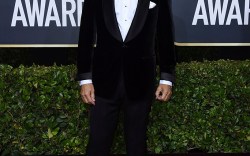 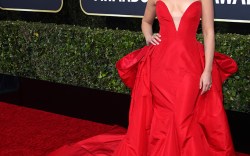 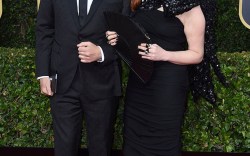 It may be January, but Taylor Swift wore a springlike floral ensemble tonight as she arrived at the 2020 Golden Globe Awards in Los Angeles.

The “Lover” singer hit the red carpet wearing a dramatic Etro gown with a blue, yellow and teal floral print. The dress featured a long train, a sweetheart neckline and cut-out detail at the midriff. Under the floor-length hem she had on a pair of navy blue satin Christian Louboutin sandals.

The “Bad Blood” hitmaker wore her hair in an updo and accessorized with drop earrings in the same colors as her gown.

Swift is a nominee tonight in the Best Original Song category for “Beautiful Ghosts,” a song she co-wrote for the film “Cats” alongside Andrew Lloyd Webber. Other nominees include: “I’m Gonna Love Me Again” (Elton John and Bernie Taupin), “Spirit” (Timothy McKenzie, Ilya Salmanzadeh and Beyoncé), “Into the Unknown” (Kristen Anderson Lopez and Robert Lopez) and “Stand Up” (Joshuah Brian Campbell and Cynthia Erivo).

Tonight’s host is Ricky Gervais, who returns in the role for the fifth time. Two major stars are set to receive lifetime achievement awards. Comedian Ellen DeGeneres will receive the Carol Burnett Award for her work in television and actor Tom Hanks will receive the Cecil B. DeMille Award for his contributions to the industry.

Click through the gallery to see more red carpet arrivals at the Golden Globes.

What the Golden Globes Red Carpet Looked Like 10 Years Ago