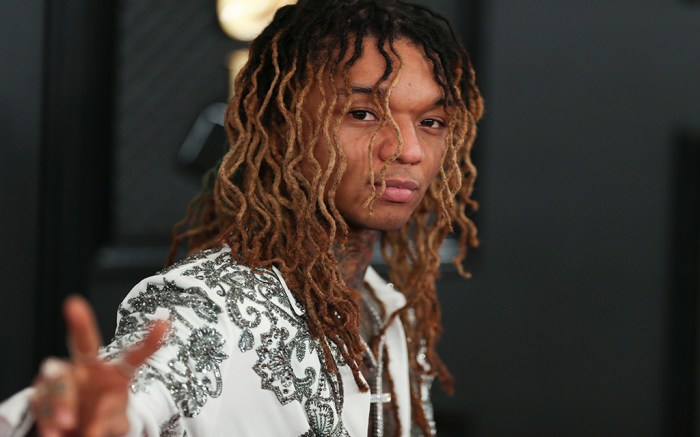 Swae Lee pushed the fashion envelope at the 2020 Grammy Awards on Sunday night in Los Angeles by forgoing the traditional red carpet tuxedo. Instead, the rapper stepped out in an embroidered ensemble and silver glitter boots.

It’s clear that men’s dressing is evolving. Swae Lee, for instance, wore a Peter Dundas women’s look from the designer’s D8 collection, which consisted of wide leg trousers with a matching white jersey pajamas suit shirt, both embellished with silver and crystal art nouveau embroidery. He paired the ensemble with Giuseppe Zanotti stacked-heel booties from his new collaboration with the designer, set to launch later this month.

Swae Lee, who is one half of sibling hip-hop duo Rae Sremmurd, hit it off with the designer after starring in the label’s “Blabber” sneaker digital campaign in 2019. Now, the two have reunited on a collection including canvas boots, suede loafers and sneakers, which are detailed in embroidery, glitter, floral motifs and a new “GZ” logo in oversize typeface. The limited-edition collection launches Jan. 31, but the rapper took the opportunity to give fans a sneak peek at the line.

Heeled men’s shoes have become more normalized thanks to collections from Christian Louboutin and Saint Laurent. And with the recent showings of men’s fall ’20 collections this month, it’s clear designers are breaking gender codes with a new interpretation. Now, consumers are starting to follow suit. Case in point: Swae Lee.

Other Grammy attendees who proved that genderless fashion may be the new normal included Billy Porter and Lil Nas X.

Take a look at all the guests on the Grammys red carpet.