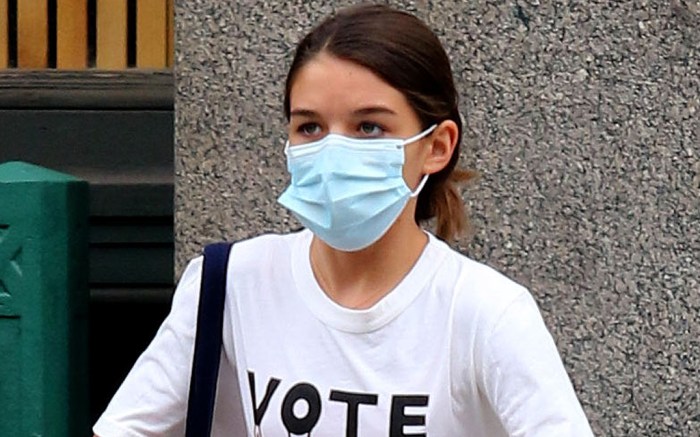 Suri Cruise took her dogs for a stroll today in New York while wearing the comfiest look.

The 14-year-old was spotted out in Manhattan wearing a T-shirt branded with the word “vote” in addition to supper baggy gray sweatpants and a protective face mask.


On her feet, the daughter of Katie Holmes and Tom Cruise continued the relaxed feel of her ensemble with her choice of blue sandals. The thong-toe pair came with a thicker strap and a slight platform footbed.

Thong-toe footwear has returned to the celebrity scene as one of spring and summer’s biggest trends. Be it classic flip-flops or thong-toe heels, the minimalistic silhouette falls in line with a ’90s-inspired revitalization of fashion, as seen with shoes like square-toe styles and pops of neon color.


The teenager was also joined by her star mother for the outing; the “Batman Begins” actress followed suit with an equally comfy-chic ensemble. Her look matched a striped sweater top with black yoga pants and black double strap sandals.

Considered traditionally “ugly” in the fashion world, Holmes joined the expansive list of celebrities (such as Heidi Klum and Paris Jackson) switching out their sleek heels for orthopedic-looking or sport-leaning sandals like iterations from Teva, Prada and Birkenstock.


Together under the guidance of Holmes and father Tom Cruise, Suri has already developed into a young fashion star. Her effortlessly cool taste includes everything from classic Ugg boots with ripped jeans to a boho-chic ensemble with a flowing red blouse, white camisole, yellow midi skirt and $80 Adidas Gazelle kicks. She also previously sported a Holmes-inspired look with a white collared shirt with puff sleeves amd light-washed mom jeans, another staple of her mom’s closet as well. Her choice of footwear echoed her shirt, walking in all-white Adidas Superstar sneakers that retail for $80 at Adidas.com.

To get Suri Cruise’s thong-toe sandal style, check out these similar pairs.

Flip through the gallery to see more of Suri Cruise and Katie Holmes’ best mother-daughter looks over the years.