Suri Cruise Goes High-Low in a $1,200 Puffer Jacket With Ugg Boots in NYC 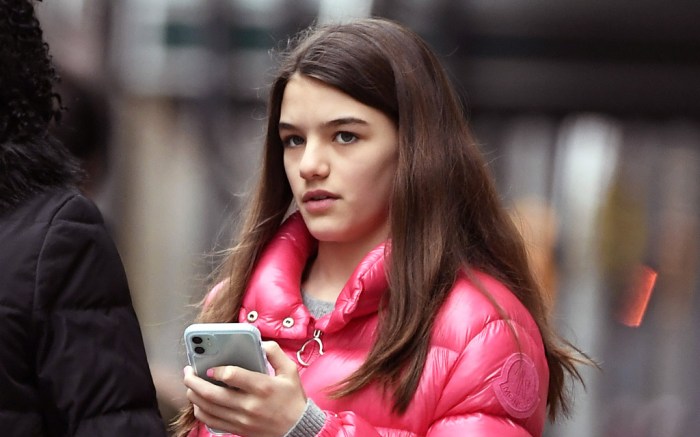 Suri Cruise braved the New York chill in sweatpants and Ugg boots yesterday, Jan. 4, as she stepped out for a walk alongside her nanny.

The 13-year-old daughter of Tom Cruise and Katie Holmes wore a hot pink Moncler puffer jacket ($1,210 on Farfetch.com) over a gray sweater and navy sweatpants.

On her feet, Suri sported Ugg’s Classic Tall boots. The shoes, which are treated to prevent moisture and staining, have a plush shearling lining and a Treadlite sole for cushioning and durability on both wet and dry surfaces. The boots retail for $200 and are available to purchase at Nordstrom.com.

The middle schooler has been spotted in Ugg wares before — and in the same hot pink as yesterday’s Moncler jacket. Suri’s feet may have grown since 2018, but that year, she was spotted out and about in New York clad in bright pink Ugg Kids Mini Bailey Bow II boots. She teamed the shoes with a ski jacket in the same eye-catching colorway.

While hot pink might be a staple of the teen set, the colorway is expected to be on the feet of many fashionistas this spring, if the spring ’20 runways of brands like Dries Van Noten, Versace and Off-White are any indication.

When it comes to her typical shoe style, Suri can often be spotted in brands approved by her famous mama. Like Suri, Holmes is a fan of Ugg. Both mother and daughter have also been seen in Adidas and Christian Louboutin.

Click through the gallery to see Suri Cruise and Katie Holmes in coordinated looks over the years.

Suri Cruise Picnics in Pastels With These Jackie O-Inspired Sandals