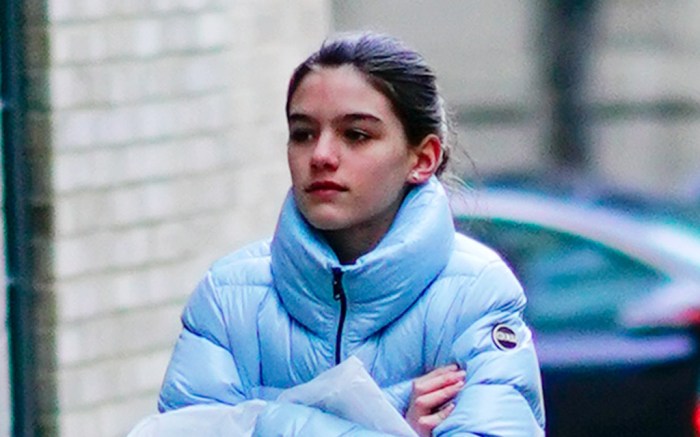 If fashion’s 20-year cycle holds true, the 2020s will mark the return of ’00s fashion. And it seems Suri Cruise has already gotten a head start.

While many celebrities are still wearing ’90s-inspired styles like square toes and heeled flip-flops, Cruise took it back to the aughts Tuesday in baggy jeans and Ugg boots.

The 13-year-old daughter of “Batman Begins” actress Katie Holmes and “Top Gun” actor Tom Cruise took to the streets of New York in a pale blue lacquered-effect puffer jacket from Colmar (available at Farfetch.com for $340), teamed with a pair of baggy, distressed jeans that could have very well been from her mom’s ’00s wardrobe.

For footwear, Cruise selected Ugg’s Classic Tall boots. The shoes feature a plush shearling lining and a Treadlite sole for cushioning and durability on both wet and dry surfaces. The boots are treated to prevent moisture from entering and staining. They retail for $200 and are available to purchase at Nordstrom.com.

While Ugg was founded in 1978, the Southern California-based brand hit its stride in 2000, thanks to none other than Oprah. The boot maker made an appearance on the talk show host’s “Favorite Things” list that year, finding favor among “It” girls like Nicole Richie, Sarah Jessica Parker, Sienna Miller and, fittingly, Holmes.

Since then, Ugg has never really gone away — and the brand seems to have found fans among the next generation of celebrities, including hip-hop artist Cardi B and model sisters Bella and Gigi Hadid. Moreover, Cruise herself has been consistently wearing the cozy label for years

Flip through the gallery to see Katie Holmes and Suri Cruise’s mother-daughter dressing through the years.

Suri Cruise Picnics in Pastels With These Jackie O-Inspired Sandals