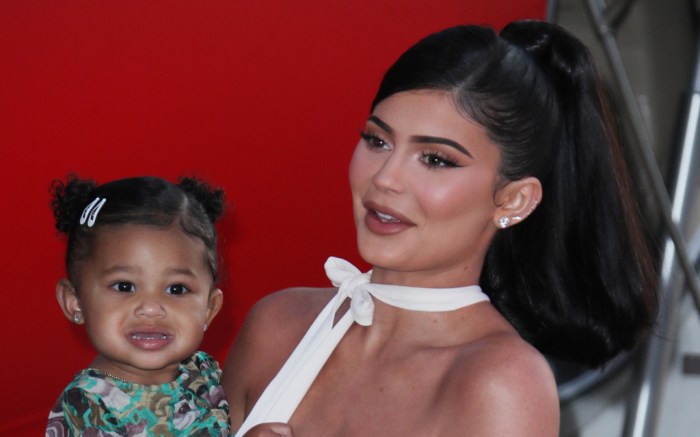 Stormi Webster may only be 2 years-old, but she’s already mastered the art of high-low dressing.

The tot, whose parents are Kylie Cosmetics businesswoman Kylie Jenner and hip-hop star Travis Scott, celebrated Easter in a designer dress teamed with accessibly priced sneakers. Stormi wore a long-sleeve silk dress from Dolce & Gabbana with a pussy bow at the neck and an all-over rose print. The dress retails on Farfetch.com for between $959 and $1,245, depending upon size.

For footwear, Stormi opted for a more affordable silhouette, choosing all-white Nike Air Force 1 Lows that sell for just $48 on Finishline.com. Named after the U.S. president’s plane, the Air Force 1 has long been a favorite for celebrities, athletes and street style stars. The silhouette has a crisp, timeless look, with a subtle leather upper, a durable rubber outsole and soft foam cushioning in the midsole. Stormi selected the shoes in a sleek all-white color palette.

Buy: Nike Air Force 1 $48
Buy it
It’s no surprise to see Stormi clad in Nike, as her father is a longtime collaborator with the Swoosh. Jenner was affiliated with Adidas last year and previously worked with Puma, but she has no shoe deal at the moment.

Below, we’ve rounded up some more all-white sneakers for kids that are just as stylish as Stormi’s Air Force 1s.

Click through the gallery for a look at Kylie Jenner’s style evolution.