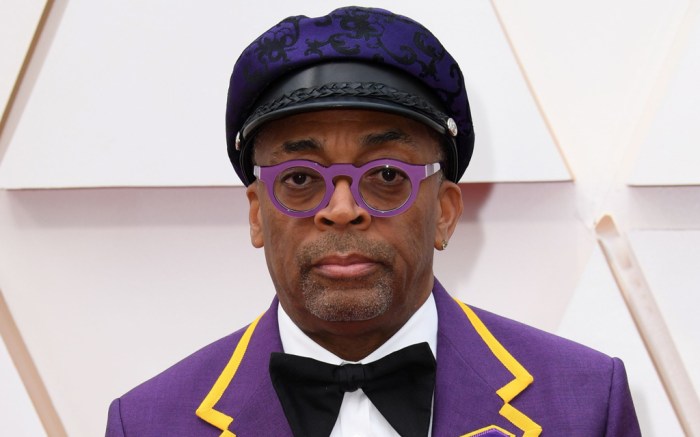 Lee stepped out at the Dolby Theatre in Los Angeles Sunday night wearing a purple tuxedo with gold trim, representing the colors of the Los Angeles Lakers, the team Bryant played for throughout his career. On his jacket lapels was the number “24,” an homage to the Nike athlete’s number on the court (he also wore 8 during his 20 years in the NBA).

For shoes, the director went with a pair of orange Nike sneakers with black laces and a gray outsole. He accessorized with a bow tie, a cross pendant and a purple and black cap. A major basketball fan, the Oscar winner directed “Kobe: Doin’ Work,” a 2009 documentary about Bryant.

At the 2019 Academy Awards, Lee received three nominations for his work on “BlacKkKlansman,” winning in the Best Adapted Screenplay category. He wore a bold purple Ozwald Boateng suit that was an homage to Prince, which he teamed with a custom-made necklace by Amedeo Scognamiglio that featured gold, diamonds and opals. Eschewing formal footwear in favor of sneakers seems to be a theme for Lee: Last year, on the red carpet he sported gold Jordan Brand kicks designed by Tinker Hatfield.

Click through the gallery to see all the red carpet arrivals at the 2020 Oscars.