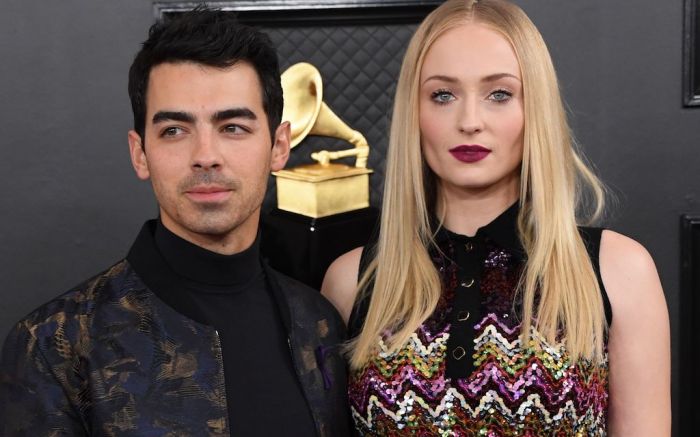 For the 62nd annual Grammy Awards, Sophie Turner brought high-fashion style to the red carpet tonight in Los Angeles. Alongside her husband, Joe Jonas, the couple once again proved their style prowess in coordinating all-black ensembles.

Sophie Turner is wearing a look straight off of the Louis Vuitton runway from the designer’s spring 2020 ready-to-wear collection. The minidress had a sleeveless, straight-cut with a high collar and a button-down detail around the neckline. The bodice was embellished with gold and pink glittery stripes. The fitted top created a chic contrast with a ruffled skirt in a satinlike material.

As for footwear, Turner paired the ensemble with cut-out black pumps that revealed the flattering arches of the foot. The shoes feature a pointed toe, stiletto heel and cutouts along the sides.

Meanwhile, Jonas had on a Zenga navy bomber and trouser set, which featured gold brush detailing throughout. He paired the ensemble with a simple black T-shirt as well as a gold ring and watch. The singer completed the iridescent look with a classic pair of black boots. The shoes feature a minimalist silhouette and a round toe with a low heel.

While far from making an appearance in matching outfits, the couple keenly complemented each other’s looks with the shimmering gold detailing and simple, shiny black footwear throughout their respective ensembles.

Worst Dressed at 2020 Grammy Awards, According to You