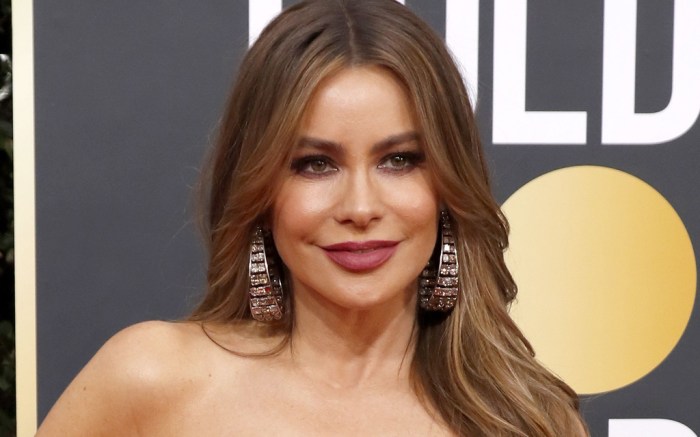 Sofia Vergara may have once been the highest-paid actress on television, but that doesn’t mean she only wears luxury labels.

In a video posted to her Instagram account yesterday, the “America’s Got Talent” judge sported a print jumpsuit from her Sofia Jeans by Sofia Vergara label, which is available exclusively at Walmart. The off-the-shoulder style retails on Walmart.com for just $37.

“The Cha Cha Jumpsuit is the perfect excuse to get out of leggings this week and into something more fun for spring 🌸💕 @walmart #SofiaJeans,” Vergara captioned her post.

For footwear, the “Modern Family” star selected silver wedge sandals. She was joined in her video by her adorable dog, who could be seen in the background of the mirror “velfie.”

The “Killer Women” executive producer is a big fan of soaring platform heels and favors designer styles from the likes of Saint Laurent, Stuart Weitzman and Amina Muaddi. While it’s uncertain what brands’ wares were on display in her wardrobe, Vergara’s Instagram video showed several pairs of platform heels on the righthand side of the closet. All pairs came in neutral tones with plenty of sparkles. Her massive wardrobe also appeared to include numerous designer handbags, as well as patterned dresses and color-coded T-shirts.

For eight years in a row, Vergara was ranked by Forbes as the No. 1 highest-paid actress on TV. The money magazine says the A-lister took home $43 million in 2019, including earnings from “Modern Family” (which recently concluded its final season) as well as pay from the Sofia Jeans brand and from her Rooms to Go furniture line.

Below, shop shoes that offer a similar look to the pair Vergara wore in her Instagram video.