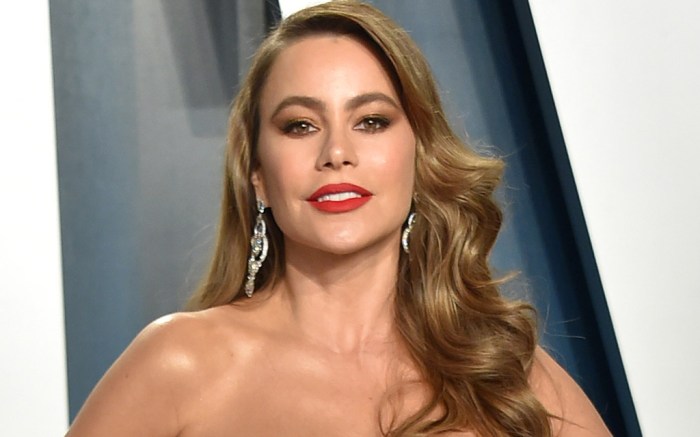 Sofia Vergara glowed on the set of “America’s Got Talent” last night.

The actress donned a bright orange bustier-topped ruched dress for yesterday’s filming of the competition series, matching with her co-star Terry Crews in the shade. While Crews teamed his tangerine suit with matching orange shoes, Vergara decided to switch things up and loop in a set of metallic sandals.

Her lifted platform pair featured a thin ankle strap and a peep-toe front atop a tall heel.

Earlier in the week, for another episode of the NBC series, Vergara went tropical for her outfit of the show The series judge’s look teamed a floral black and green bustier-style crop top with high-rise black tailored trousers. In addition to her printed top, Vergara gave the outfit a bold element with her addition of black platform sandals with a towering heel and lifted toe; the pair falls in line with Vergara’s typical footwear styles, often opting for sky-high sandals and gravity-defying heels for both casual and formal wear.

When it comes to style, one of the actress’ most beloved venture is her Sofia Jeans by Sofia Vergara label, sold at Walmart, offering affordable styles for every type of body. Vergara models silhouettes from the line multiple times a week on social media as part of her #FashionSelfi series.

In addition to her jeans line, the TV personality and actress also stars in ads for Foster Grant, modeling styles from her debut collection with the eyewear brand. On top of offering glasses, Vergara and Foster Grant also plan to donate one pair of reading glasses to RestoringVision for every pair of eyewear sold. RestoringVision empowers lives by helping millions of people regain their sight across the world.

And earlier this year, Vergara revealed that she is the new face of Dolce & Gabbana and appeared in a campaign to promote the label’s new Devotion handbag.

Click through the gallery to see even more of Sofia Vergara’s best street style looks over the years.