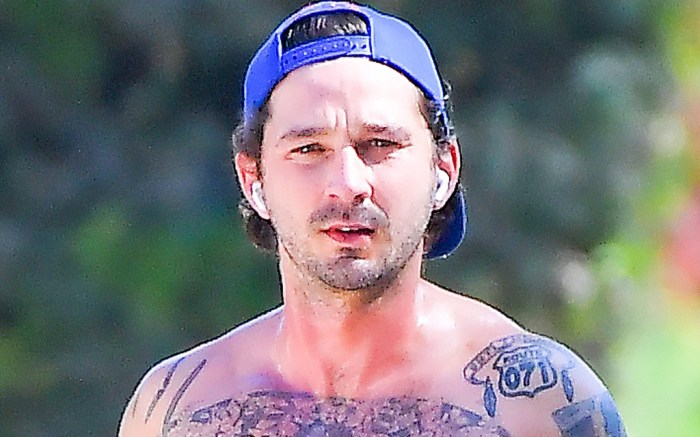 Shia LaBeouf showed off his impressive collection of tattoos today as the actor headed out for his usual run in Los Angeles.

The “Holes” star got into his stride this morning during a shirtless jog, opting for his go-to all-black Nike leggings for the occasion; similar bottoms come with a $60 price tag and can be found at Nike.com.

For his workout shoes of choice, the Disney Channel alumna opted for a classic running silhouette with all black uppers and a contrasting two-tone midsole. The design bears resemblance to styles from Brooks, with similar pairs retailing for $150 on the brand’s website.

Throughout his time in quarantine, LaBeouf has continued to use running as a primary form of exercise. Just last week, the “Honey Boy” star opted for similar tights along with the same set of Brooks running shoes as he took a quick mid-run break to hop on a phone call.

Earlier in the year, when temperatures were at their Californian summer peak, LaBeouf traded his running leggings for athletic shorts, which he owns in a wide mix of shades.

While his running attire features top athletic brand names, the actor prefers labels like Golden Goose, Ugg and Nike for his off-duty casual attire. LaBeouf’s style can be described as retro-chic, pulling trends from decades past to create his ensembles — think throwback warmup jackets, military-style boots, cropped shorts and more.

Click through the gallery to see what stars like J-Lo and more wear for their own workout ensembles.