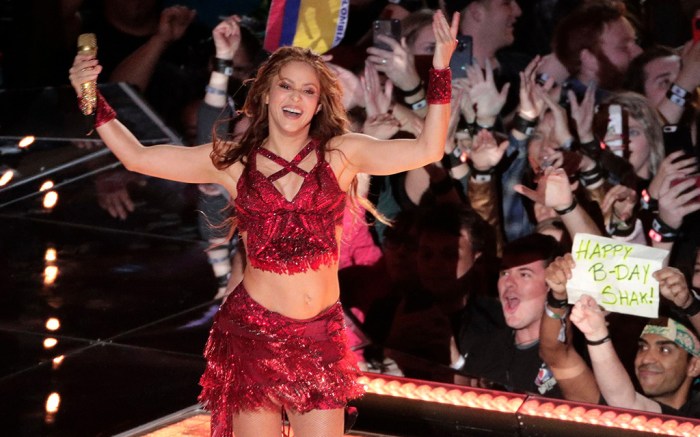 Shakira knows how to put on a spectacle, and her onstage ensemble was just as dramatic as her performance. The “Hips Don’t Lie” singer opened the show on Sunday night during the Super Bowl halftime show in Miami wearing a red-hot outfit.

She took the stage singing “Shewolf” in a custom-beaded and fringed two-piece Peter Dundas look, but her $20,000 boots really stole the show.

Shakira performed in a pair of wedge boots made custom by artist Daniel Jacob, also known as Dan Life. According to the designer, it took 10 days to complete the boots, which are adorned with 30,000 crystals. Rapper Bad Bunny joined her onstage to perform “I Like It Like That,” while all of her dancers donned red Sam Edelman boots.

Then it was Jennifer Lopez’s turn. The superstar wore a leather Versace outfit while she performed hits such as “Jenny From the Block” and “Get Right.” J Lo made a quick change into a sheer, shining silver sheer bodysuit that seemed to have been a nod to her “Hustlers” stripper character as she pole danced in front of the massive crowd.

And we didn’t have to wait long to see Shakira again. She came back out, this time wearing a gold fringed and embroidered look by Peter Dundas, paired with matching gold glitter Adidas sneakers.

To top it off, FN’s Style Influencer of the Year J Balvin made a surprise appearance to sing “Mi Gente” while Lopez’s daughter shocked the crowd with her voice, singing “Let’s Get Loud” and “Born in the USA.”