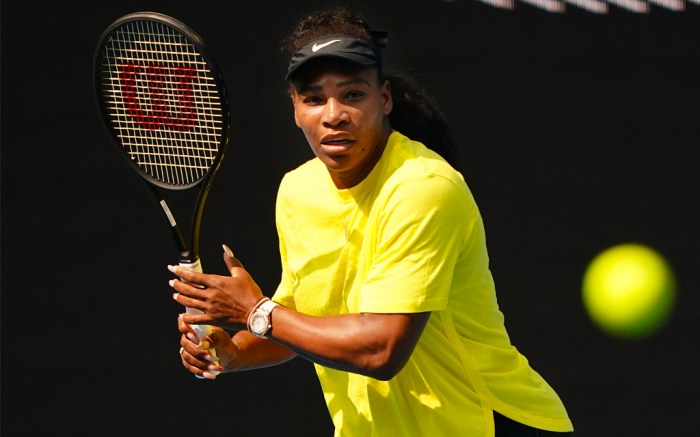 Serena Williams is already on her A-game at the Australian Open.

The tennis pro and Nike athlete took the court during an open practice at Melbourne Park today wearing a Nike-centric ensemble including a bright yellow t-shirt, black cropped leggings and a black and white visor.

On her feet, the legendary Grand Slam winner moved with ease in Nike sneakers; the lilac and green-accented set of tennis shoes feature a textured outsole and a subtle signature on the inside upper.

Williams is set to play Anastasia Potapova in the first round of the tournament that kicks off on Monday in Australia, with the match set to take place Sunday evening at 8:15 p.m. E.T.

With 23 Grand Slam wins under her belt, Williams is looking to tie Margaret Court’s record of 24 titles; Williams won her most recent major championship at the 2017 Australian Open after defeating her sister Venus Williams.

Serena Williams signed her initial signature deal with Nike in 2004 and has since had a series of signature shoes and apparel. Together, the athlete and the brand announced in October 2019 that they are looking for a group of emerging designers to create a Williams-inspired shoe and apparel collection for 2020.

The project is part of Nike’s ongoing efforts to “bring diverse perspectives into design,” the sportswear giant said in a release.

Click through the gallery to see more of Serena Williams’ on-court styles throughout the years.

Serena Williams Twins With Her Friend in Head-to-Toe Nike

Serena Williams Twins With Daughter Olympia in Nikes and Tutus