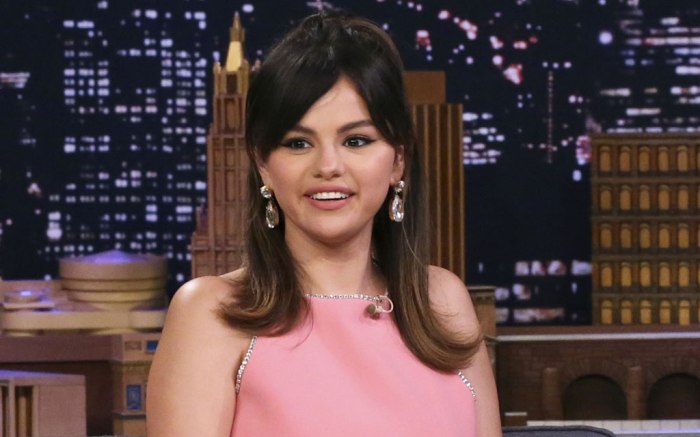 The pop star channeled the groovy decade with her ensemble for an appearance on “The Tonight Show Starring Jimmy Fallon” Monday night.

Gomez sported a pastel pink Miu Miu dress. The crystal-trimmed minidress featured a round neck and open back.

The shape of the dress, which retails on Farfetch.com for $2,210, mimicked the dresses worn by mod-era icons such as British model Twiggy and former first lady Jackie Kennedy.

While women in the ’60s tended to sport kitten heels or flats, Gomez went for sky-high platform heels, an on-trend silhouette that appeared in plenty of fall ’19 collections. The Disney Channel alum chose sold-out silver Prada sandals with a chunky block heel and a knot accent.

The “13 Reasons Why” producer’s half-up, half-down hairdo also had ’60s written all over it, resembling the voluminous, hairspray-laden ‘dos for which the era was known. She completed the chic ensemble with a pair of $120 crystal-accented earrings from Roxanne Assoulin, which are available on Net-a-Porter.com.

On “Fallon,” Gomez and host Jimmy Fallon played a game called “Can You Feel It?” The pair took turns placing their hands inside boxes filled with mystery objects, which they had to identify without looking.

Click through the gallery to see how Selena Gomez’s style has evolved over the years.