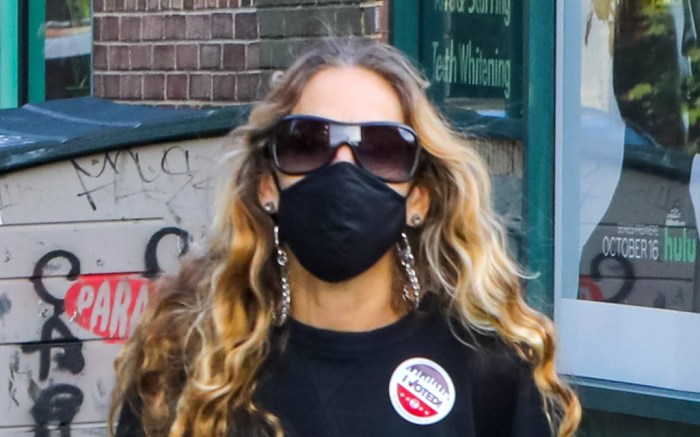 Sarah Jessica Parker turned voting into a family affair yesterday as she headed to the polls in New York with her husband, Matthew Broderick, and, for his first time voting, their 18-year-old son, James Wilkie Broderick.

The trio sported their best voting-chic looks as they cast their ballots for the president of the United States on Tuesday. Coordinating with her son in a $60 Jason Wu for Joe Biden sweatshirt, the “Sex and the City” actress teamed her top to baggy mom jeans cuffed at the hem to reveal her socks underneath. She also included a $30 Pretty Connected face mask, available at Etsy.com.


SJP’s purposefully mismatched her socks for the outing, rocking a $15 Biden Harris sock on the right foot. On the left, the star opted for Mother Denim’s collaboration with I am a voter., a nonprofit and nonpartisan effort to increase voter turnout during election years. The pair comes branded with the organization’s name stitched across classic tube socks with black striping across the ankle and a finishing red line along the toe cap.

The pair retails for $24 at MotherDenim.com with $5 from every purchase going back to I am a voter.’s cause and efforts.

On top of her statement socks, the footwear designer herself selected a pair of black and white sneakers from one of the biggest sportswear labels around. Deemed the 2020 Atheltic Brand of the Year for the upcoming FN Achievement Awards, New Balance is the must-have name for footwear thanks to its sleek silhouettes and hit collabs this year.

Similar designs to SJP’s shoe of the day retail for $80 at NewBalance.com.


While the FN cover star herself is best known for her iconic role as Carrie Bradshaw in the HBO series, Parker’s list of accomplishments stretches beyond television. Parker started her eponymous shoe brand in early 2014. Styles are handcrafted in Italy, with resort, spring, pre-fall and fall collections released each year. Parker was also meant to star alongside Broderick in the Broadway revival of “Plaza Suite” before Broadway shows were forced to stop production due to the coronavirus pandemic.

Prep for an active day around town with these comfy off-duty sneakers inspired by Sarah Jessica Parker.