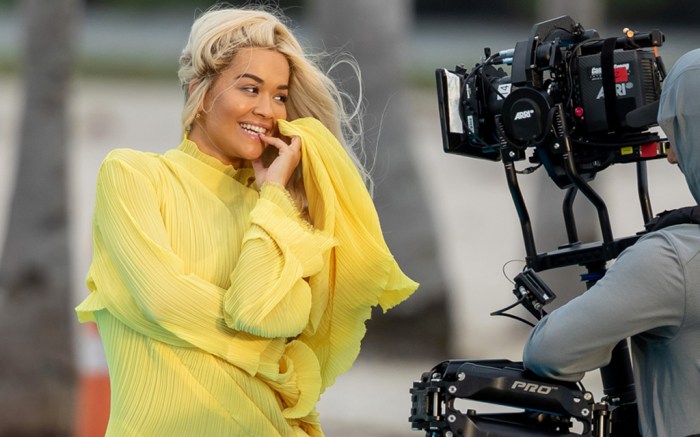 The “Ritual” singer filmed a new music video in Miami today wearing a flowy semi-sheer yellow gown as she stood on a mini barge in the ocean.

The songstress matched her bright look with a set of equally show-stopping baby blue glittering double-strap sandals with a thick block heel.

Not wanting to ruin her shining heels between takes, Ora hopped on someone’s back, whose Adidas Stan Smith sneakers were better suited for the sandy and wet terrain.

The 29-year-old entertainer released her second studio album “Phoenix” in 2018 with an accompanying world tour that started in March 2019 and is continuing into 2020 until its final stop in July in Paris.

On top of her successful music career, Ora currently is a judge on the United Kingdom’s version of “The Masked Singer” and collaborated with Italian footwear designer Giuseppe Zanotti on a collection of stilettos, boots and slides that debuted in January 2019.

Click through the gallery to see more of Rita Ora’s best style moments.