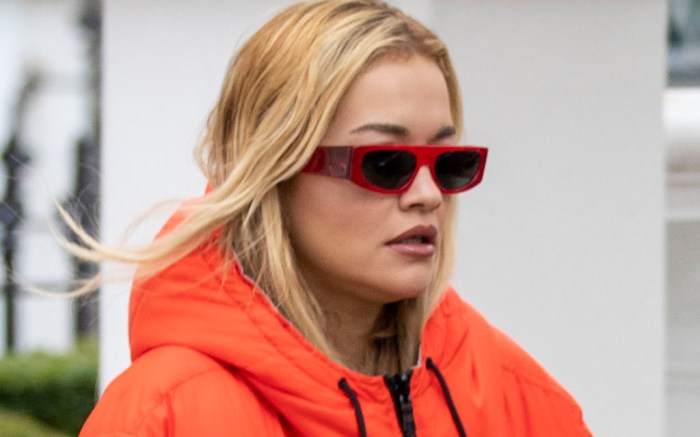 Rita Ora braced the chillier weather in London today as she headed out of her apartment in the city.

Starting off her look with standout red shades, the  “How to Be Lonely” songstress opted for a bright fall-chic ensemble for her outing, layered her new favorite camouflage cargo pants with a DNKY Tech puffer; the neon orange design released exclusively for Urban Outfitters in December 2019 and, though it has since sold out, once retailed for $50 at UrbanOutfitters.com.

The bold elements of Ora’s off-duty looks didn’t stop at her apparel either. On her feet, the British singer modeled a pair of multicolored sneakers from Jordan Brand. The Maison Chateau Rouge x Air Jordan 1 Mid SE “Fearless” comes from the label’s “Fearless Ones” collection that dropped in November 2019, a drop consisting of six different takes on the classic Air Jordan 1 silhouette. The intention behind the special edition sneakers was to highlight communities and collaborators making impacts in their respective realms.

Ora’s particular style is an iteration in connection with Maison Chateau Rouge, a Parisian brand employing African-inspired designs as a way of emulating the rich culture of a modern African population in the French capital. The silhouette includes hits of cinnamon red and sky blue overlays atop a soft vanilla-shaded upper.

While the pair once retailed for $130 at time of sale, the style now resells anywhere from $329 all the way up to $3,678 for more coveted sizes at StockX.

And Ora’s experience with the footwear industry goes beyond chic street style. She has been a longtime Adidas partner and collaborated with Giuseppe Zanotti in January 2019 for an exclusive collection of shoes. This year, she also announced a partnership with German footwear retailer Deichmann. And if that wasn’t enough, just last week, Ora joined forces with ShoeDazzle for a series of fall footwear styles that all retail for under $100. Coming with everything from thigh-high boots to trending utilitarian styles, the pairs can be found at ShoeDazzle.com with wallet-friendly price tags.

Click through the gallery to have a look at Rita Ora’s best street style looks over the years.