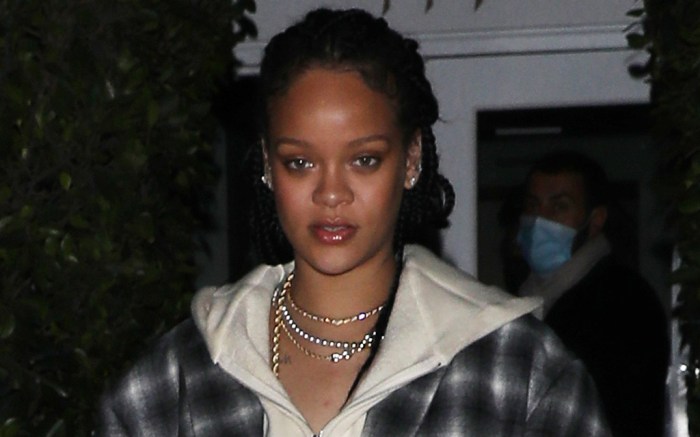 Rihanna gave loungewear an elevated twist this week as she casually modeled pieces from her newest collaboration.

The “What’s My Name?” singer stepped out in Santa Monica, Calif., last night for dinner with friends in the most comfy-chic look. Holding tight to a Chanel bag, Rihanna’s outfit included a matching cream hoodie and sweatpants set layered with an oversize blue flannel custom Nina Ricci jacket for a pop of print.

Accented by a trending chain anklet, the musician broke out a pair of new Fenty by Amina Muadid heels when it came to footwear. The design, that launched just yesterday, features a sharp square-toe front with ruched white leather uppers and a slingback strap to secure the fit. Titled the Don’t Be Square Slingbacks, the heels come set atop a 4-inch tapered heel and retail for $700 at Fenty.com.

Amina Muaddi and Rihanna first joined forces for their inaugural joint Fenty footwear collection in July. Since then, the collection went on to become one of the biggest of 2020, earning it the title of the FNAA Collaborator of the Year for the upcoming award show on Dec. 8.

As for Rihanna, the multi-hyphenated artist has become a major force in the fashion world, beyond her impeccable personal style. Her first major foray into designing occurred when she signed with Puma in 2014; in September 2015, she went on to create her first-ever Fenty (an ode to the superstar’s surname) product, the Fenty Puma Creeper, which won her her first FN Achievement Award for Shoe of the Year in 2016.

Click through the gallery to discover more of Rihanna’s most risk-taking style moments over the years.