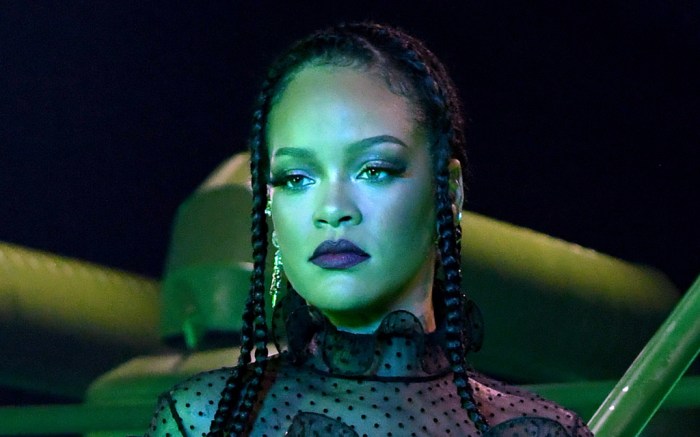 Rihanna’s Savage x Fenty show may release tonight at midnight but the “Believe It” singer previewed her own on-stage look with flair.

The brand’s founder stole the catwalk during the Savage x Fenty Vol. 2 show in a custom Alexandre Vauthier Couture black ruffle swiss-dot blouse from the brand’s fall ’20 collection. Layered over sheer tights, Rihanna then matched the top to custom leather short shorts from the brand as well, accented with mini garter clips and matching leather gloves.

On her feet, Rihanna really brought the monochromatic appeal home with her choice of sleek pumps. The pointed-toe pair came embossed with a textured animal print atop a patent upper and pointed-toe finish; the design included a towering stiletto heel and a securing ankle wrap strap, accented by the singer’s choice of a beaded white anklet.

Earlier in the night, the “Umbrella” songstress debuted another all-black look with a blazer-style dress on the red carpet. The number included a plunging neckline matched to a bralette from her lingerie brand and coordinating gloves.

The Savage x Fenty Show, Vol. 2 airs on Amazon Prime Video on Friday, Oct. 2, at midnight. Travis Scott, Rosalía and Miguel lead the pack of artists performing throughout the show and will be additionally joined by Bad Bunny, Mustard, Roddy Rich and Ella Mai.

Thus far, the major names appearing in the show include models like Cara Delevingne, Bella Hadid and Irina Shayk along with a few stars such as Lizzo, Demi Moore, Willow Smith, Erika Jayne, Chika and Paris Hilton. Normani returns to appear in the show after her memorable appearance in last year’s show. Big Sean and Christian Combs will also help debut the brand’s menswear collection. The pieces from the new collections as well are expected to drop on Savagex.com as the show debuts.

Didn't they tell you? ⁣ Don't you DARE miss the Baddest of the Bad in the #SAVAGEXFENTYSHOW VOL. 2⁣⁣ Only on @amazonprimevideo 10.02.20.⁣⁣ @badgalriri #SAVAGENOTSORRY

As for Rihanna herself, the multi-hyphenated artist also has become a major force in the fashion world, beyond her impeccable personal style. Her first major foray into designing occurred when she signed with Puma in 2014; in September 2015, she went on to create her first-ever Fenty (an ode to the superstar’s surname) product, the Fenty Puma Creeper, which won an FN Achievement Award for Shoe of the Year in 2016.

Click through the gallery to see more of Rihanna’s best risk-taking style moments over the years.