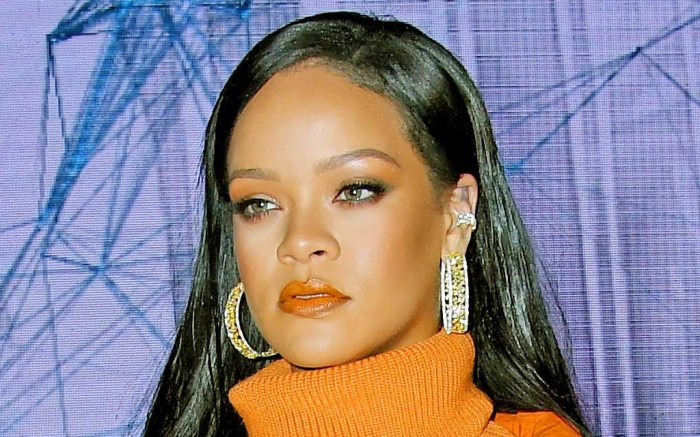 The musician added yet another title to her evergrowing list of accomplishments: a skincare founder. The “Umbrella” songstress virtually launched her Fenty Skin line last night and dressed up for the occasion in a chocolate leather dress from her Fenty apparel line; the floor-sweeping number featured a high-leg slit and a low-scooping back.

As for footwear, she opted for a new pair of sandals from her recent collaboration with trending footwear designer Amina Muaddi.

such a fun virtual pre-launch party for @fentyskin yesterday! Thanks to all of you for the tremendous engagement and for being a huge part of our event! FENTYSKIN.com officially launches tonight at MIDNIGHT EST.

The Caged In sandal wraps up the length of the foot calf with smooth crisscrossing straps; the flared 4.1-inch metallic heel pulls inspiration from Muaddi’s signature designs and is inspired by the “shape and strength of steel nail,” according to Fenty. Though the silhouette only has dropped in Candy Pink and Coco White colorways thus far, Rihanna modeled an unreleased brown leather iteration for her virtual event. The silhouette retails for $740 at Fenty.com but both released colorways are currently sold out.

While Rihanna is best known for a successful music career with a new studio album dropping any day now, she also has become a major force in the fashion world, beyond her impeccable personal style. Her first major foray into designing occurred when she signed with Puma in 2014; in September 2015, she went on to create her first-ever Fenty (an ode to the superstar’s surname) product, the Fenty Puma Creeper, which won an FN Achievement Award for Shoe of the Year in 2016.