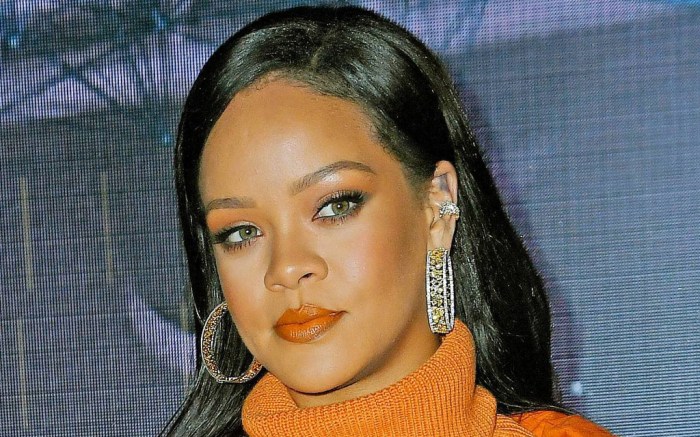 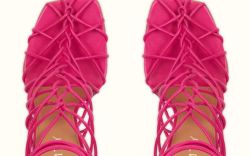 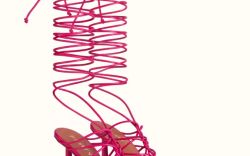 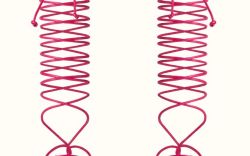 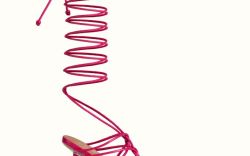 Amina Muaddi and Rihanna first joined forces for their inaugural joint Fenty footwear collection in July. Since then, the collection went on to become one of the biggest of 2020, earning it the title of the FNAA Collaborator of the Year during tonight’s virtual show.

To share her appreciation for her new title, RiRi took to the smaller screen with a twist on the monochromatic trend in an outfit that had us green with envy — literally. The “Believe It” singer teamed the fuzziest green hat with a coordinating pistachio zip-front hoodie. Her hat bears resemblance to a silhouette that Rihanna has previously sported from designer Emma Brewin which retails for $419 at Farfetch.com.

In addition to a set of $330 Fenty sunglasses, Rihanna then layered in a series of glam gold chain necklaces and earrings the elevate the relaxed at-home attire.

Though the singer pulled off waist-up styling for her appearance, it’s Rihanna’s footwear that oftentimes steals the show. The “What’s My Name?” singer has continued to model her own award-winning Fenty by Amina designs, especially from the newest capsule which dropped in November.

For example, the singer stepped out in Santa Monica, Calif., on Nov. 12 to attend a dinner with friends in the most comfy-chic look. Holding tight to a Chanel bag, Rihanna’s outfit included a matching cream hoodie-and-sweatpants set layered with an oversize blue flannel custom Nina Ricci jacket for a pop of print.

Accented by a trending chain anklet, the musician broke out new Fenty by Amina Muadid heels featuring a sharp square-toe front; the design also includes ruched white leather uppers and a slingback strap to secure the fit. Titled the Don’t Be Square Slingbacks, the heels are set atop a 4-inch tapered heel and retail for $700 at Fenty.com.


The multi-hyphenated artist has become a major force in the fashion world, beyond her impeccable personal style. Her first major foray into designing occurred when she signed with Puma in 2014. In September 2015, she went on to create her first-ever Fenty (an ode to the superstar’s surname) product, the Fenty Puma Creeper, which won Rihanna her first FN Achievement Award for Shoe of the Year in 2016.

She debuted her lingerie collection, Savage x Fenty, in 2018, before she and LVMH Moët Hennessy Louis Vuitton became partners the next year, making her the first female designer of color at the helm of a luxury brand under the conglomerate. Together, they released the first Fenty collection consisting of apparel, footwear, accessories and more in May 2019.

Try out the monochrome trend for yourself in these pieces inspired by Rihanna’s look at the 2020 FNAAs.

Click through the gallery to discover more of Rihanna and Amina Muaddi’s award-winning shoes.