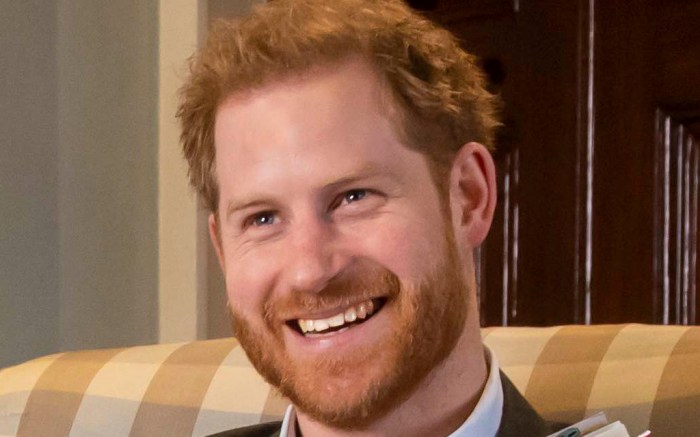 Prince Harry made a very special cameo for the 75th anniversary of Thomas the Tank Engine; the first-ever book that originated the famous train’s tale.

The Duke of Sussex will take part in a program celebrating the milestone, which airs in the U.S. on Netflix on Friday and the following day in the U.K. on Channel 5 Milkshake! It will be available in more than 180 countries.

Pictured in the United Kingdom in January before he and Meghan Markle stepped back from their royal duties, the 35-year-old royal was all smiles in a brown blazer, pale blue button-down top and navy slacks. The Duke of Sussex recorded a message for the 75th-anniversary episode of “Thomas and Friends” and also introduced a new program titled “Thomas and Friends: The Royal Engine,” which follows Queen Elizabeth II and Prince Charles as animated characters.

For footwear, the royal dressed down his look with a set of round-toe brown Chelsea boots; the suede pair included a lighter outsole with a short stacked heel.

Prince Harry has always been a fan of Thomas the Tank Engine, ever since he himself was a little boy. Pictured in September 1987 just after his third birthday, the royal waved to photographers as he held a Thomas the Tank engine bag.

Since the recording of the message, Prince Harry and Meghan Markle have left the United Kingdom and been spotted in Los Angeles after they relinquished their titles of His/Her Royal Highness on March 31. The royal couple still is allowed to keep their titles of Duke and Duchess of Sussex but they will no longer receive any public funds. Frogmore Cottage, near Windsor Castle in London, will remain their residence in England, but they will be repaying the $3 million of taxpayers’ money that they spent to renovate the property.

Yesterday, Prince Harry officially launched a new ventured titled HeadFit in a joint effort with the Royal Foundation’s campaign, Heads Together, and the Ministry of Defense. HeadFit is an online platform that provides mental health tools and resources for military personnel.

“I’ve long believed the military community should lead the way for the rest of society. For too long we have been waiting for problems to arise and then reacting to them,” said Prince Harry in a statement. “HeadFIT is a proactive approach to mental fitness, focusing on our own potential to increase our performance, using proven methods in sport science.”

Beyond their royal duties, both the Duke and Duchess of Sussex have continued charitable efforts throughout their time as royals. In fact, Markle curated a collection of work-ready apparel in September 2019 with Smart Works, an organization that helps vulnerable women reenter the workforce; for every piece purchased, an item was donated back to Smart Works to help supply women with confidence-boosting work attire.

Click through the gallery to see more of Prince Harry’s adorable baby photos.