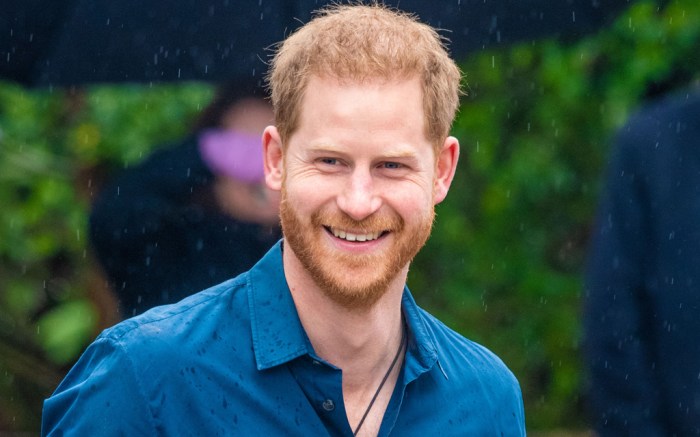 Since taking a step back from his royal duties, Prince Harry’s next move includes breaking into music. At least, when it’s for a good cause.

The royal heir joined musical legend Jon Bon Jovi today to record a new version of “Unbroken” at the famous Abbey Road Studios for the upcoming Invictus Games. The Duke of Sussex chose a blue button-up dress shirt and dark-wash jeans for the occasion, bracing the wet weather in a pair of unexpected shoes.

His lace-up derby shoes feature a blue suede paneled upper and a low stacked brown heel with a rubber outsole; the wing-tip Ted Baker Deelans silhouette retails originally for $240 but are sold out on most sites. Zappos has the styles available for over 50% off, as does The Hut, selling the style for $102.

The softer, unfinished leather shoes became soaked due to the heavy rains and puddles on the street, risking damage to the material. When suede gets wet, it doesn’t repel water like a smooth leather or a vinyl so moisture can affect the fabric’s natural texture causing it to be stiffer and potentially causing residual stains and water marks. The prince didn’t seem to mind, though, as he was all smiles posing on the iconic Abbey Road crosswalk with Bon Jovi himself and members of the Invictus Games Choir, who are joining the two figureheads in recording the special single in aid of the Invictus Games Foundation.

Prince Harry started the Invictus Games in 2014 to provide wounded, injured or sick armed services personnel and their associated veterans a chance to participate in nine different sporting events including indoor rowing, wheelchair basketball and more. As for his singing chops, the world will have to wait for the song’s rerelease in March.

Flip through the gallery to see some adorable throwback baby photos of Prince Harry.

Prince Harry Is Loving These Suede Chukkas for Africa Tour