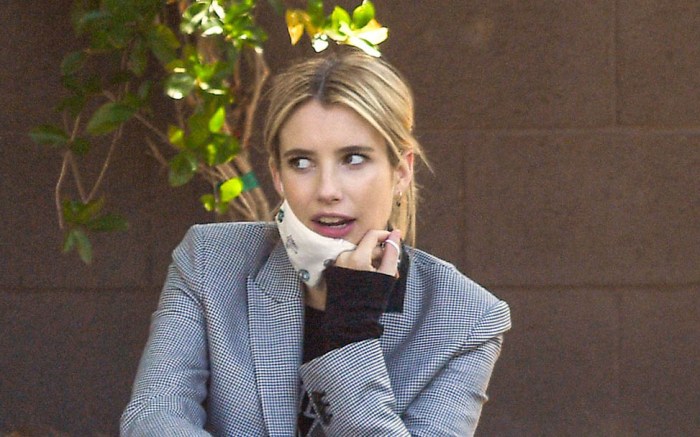 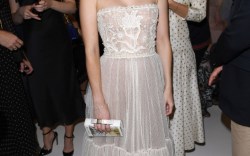 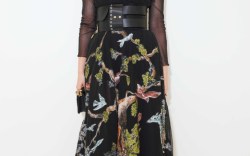 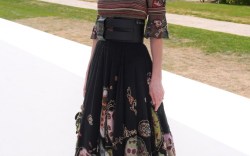 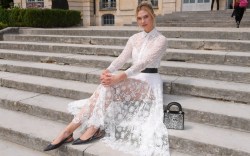 Emma Roberts grabbed a coffee with a familiar face Sunday afternoon. The 29-year-old actress wore a houndstooth blazer over a plain black T-shirt and black leggings. For footwear, Roberts opted for a pair of classic black and white checkered Vans skater shoes.

Chatting it up with fellow A-Lister Kristen Stewart and friends, Roberts carried a black Coach purse and kept herself safe with a face mask in a white pattern.

Buy: Vans Asher Slip-on Sneaker $49.99
Buy it
Recently, Roberts gave fans some exciting news when she posted to her Instagram and confirmed the rumors that she is pregnant. Dressed in a floor-length white maxi dress, she announced that she and actor Garrett Hedlund are expecting their first child together.

Roberts looked angelic in her linen dress, which is from the Sleeper’s Summer Collection. The dress features an off-the-shoulder puff sleeve made of 100% linen with patterned micro polka dots.

Hedlund cozied up to her in a casual white tee shirt, green button down and jeans. For footwear, the 35-year-old actor wore forest green suede boots. The two have been dating since March 2019.

This isn’t the first time that Roberts has worn a piece from Sleeper. Earlier this summer, the “American Horror Story” star posted a picnic-worthy outfit, dressed in a pink and white gingham corset dress featuring puff sleeves, a square neck and a center-front slit.

Roberts’ off-duty style is typically casual with a trendy twist. In terms of pricing, her footwear choices run the gamut. She has stepped out in recent months wearing affordable footwear such as New Balance sneakers, Minnetonka moccasins and Vince Camuto flats. She’s also opted for designer styles from brands including By Far, Alexander McQueen, Sarah Flint and Miu Miu.

While it’s been a while since the “Scream Queens” alum last hit the red carpet, she typically goes for soaring heels at awards shows, premieres and the like. For past appearances, Roberts has selected heels from the likes of Tabitha Simmons, Christian Louboutin and Malone Souliers. She is styled by sister duo Cara Smith and Brit Hines (née Smith), who also work with Sophia Bush and Whitney Port.

Add a versatile white puff-sleeve dress to your wardrobe by shopping styles similar Roberts below.