Political Statement Dressing Is Trending on the 2020 Grammys Red Carpet 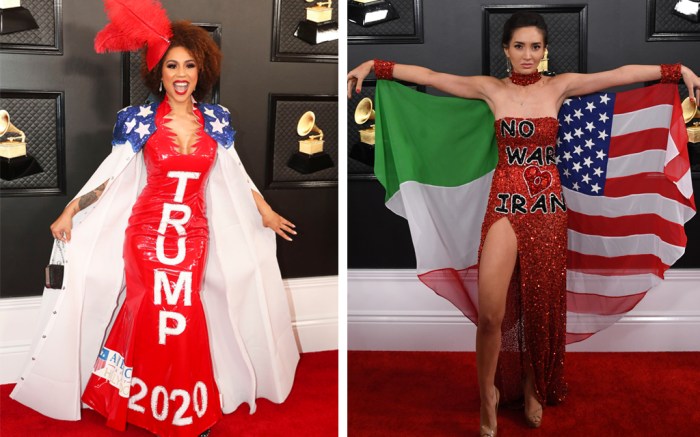 With the 2020 Grammy Awards falling on the same year as the upcoming U.S. presidential election, it’s no surprise that political dressing appeared on the red carpet at the awards show. The Staples Center in Los Angeles tonight saw attendees, including Megan Pormer and Joy Villa, voicing their political standings through their style.

Pormer chose a look that reads “No War Iran” written in black and silver sequins sewn onto her red gown featuring a high leg slit. The dress incorporated cape sleeves with the flags of both the United States and of Iran stitched together as one.

The Iranian actress and influencer, known for her roles in “Beneath a Sea of Lights” and “Renegade Alliance: The Clean Up,” matched her bold look with a pair of more subdued neutral-toned Christian Louboutin peep-toe pumps with a chunky platform. The Fetish Peep heel from the brand retails for $945 and is available now at Neiman Marcus.

Contrasting Pormer’s ensemble, Joy Villa arrived once again in a look with a clear message.

After attending the 2019 Grammy Awards in a pro-Trump gown, the singer-songwriter stepped onto the red carpet in a hard-to-miss look that included a starry white coat, a sequin clutch with the Republican party’s elephant symbol, and a red latex halter gown covered in phrases from “Trump 2020” to “Impeached & Re-Elected.”

Under the long hem of her statement gown, she chose to match the political look with a “Betsy Ross” American flag-patterned patent pump with a red heel.

The brand behind the ensemble is Desi Designs Couture, the same designer that created her look last year. Her gown at the 2019 Grammys was designed to mimic President Donald Trump’s proposed border wall.

Click through the gallery to see more red carpet arrivals at the 2020 Grammy Awards.