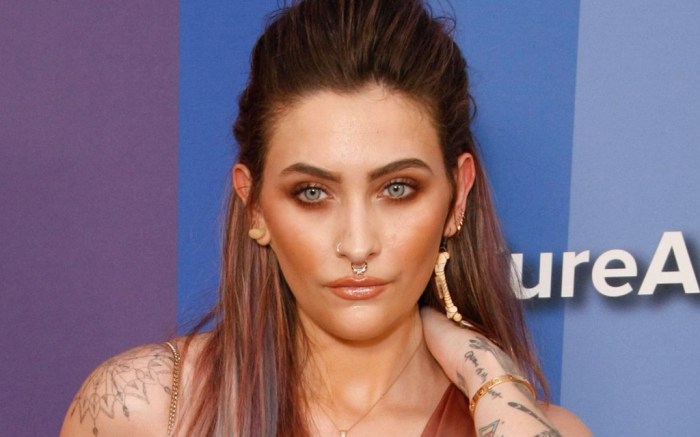 Taking to the photo-sharing platform yesterday, Michael Jackson’s musician daughter posed in an off-the-shoulder white sweater teamed with flare-legged blue jeans with a rip in one knee and a frayed hem.

For footwear, Jackson selected Birkenstock Mayari sandals. The choice adhered to the big-toe shoe trend that has been popular among stars such as Katie Holmes, Bella Hadid and Gabrielle Union since last summer. The sandals boast a contoured suede footbed with a cork midsole and a faux leather upper. On the DSW website, the shoes are available for purchase with a $100 price tag.

Known for her distinct style sensibility, Jackson has actually been spotted the same sandals before. She wore the pair while attending a Black Lives Matter protest in Los Angeles last month, teaming them with an oversize knit sweater and printed harem pants.

The “Gringo” actress is hardly the only celebrity fan of Birkenstock. The Germany-based company has a slew of enthusiasts both young and old. Emma Roberts, Britney Spears, Gwyneth Paltrow and Jessica Alba are just a few of the many  stars who love the company’s shoes. Known for its comfy sandals and eco-friendly styles, Birkenstock has also picked up FN’s prestigious Brand of the Year honor twice, in 2013 and 2017.

Over the years, Jackson has starred in numerous fashion campaigns, including for Calvin Klein, AGL, Penshoppe and Re/Done x G.H. Bass & Co. In addition, she has appeared front row at multiple fashion shows — for labels such as Moschino, Christian Dior and Stella McCartney — as well as walked the runway for Jean Paul Gaultier.

When it comes to her personal style, Jackson can often be found in hippie-inspired wares, choosing tie-dye, flared jeans and beaded jewelry. Off-duty, favorite shoe brands of the “It” girl’s include Converse and Ugg. For the red carpet, she unsurprisingly goes glam in designer wares, having previously selected heels from Elisabetta Franchi, Balmain and Sophia Webster.

Below, we’ve rounded up some more toe-loop sandals that offer a similar look to Jackson’s pair.