Worst Dressed Celebrities at the 2020 Oscars, According to You 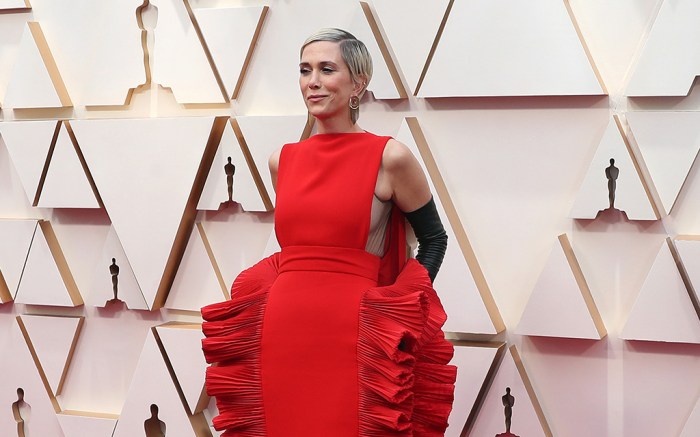 The Academy Awards tends to bring out some of the most stylish red carpet moments of the year, and tonight’s ceremony in Los Angeles was no exception.

While stars brought their fashion A game to the carpet, not everyone’s looks won over social media. Throughout the night, netizens were quick to weigh in with their assessments, and some styles definitely did not impress. Here, FN rounds up some of the ensembles that viewers felt missed the mark.

Kristen Wiig took a red carpet risk in a bold red Valentino gown with dramatic ruffles at each side, which she teamed with elbow-length black gloves and Christian Louboutin Maia Labella heels. “Is she TRYING to be the worst dressed??? WT actual F. The hair is good for her, that is all,” wrote one Twitter user. Another thought she looked like a fruit rollup.

Is she TRYING to be the worst dressed??? WT actual F. The hair is good for her, that is all #oscars pic.twitter.com/Qrg9OmiRkj

Kristen Wigg is giving us fruit roll up tonight pic.twitter.com/gIWFmYYvaG

Some viewers were surprised to see reality star Blac Chyna on the carpet. Chyna arrived in a plunging black gown with blue feather accents that she paired with platform heels. One Twitter user said she resembled the animated character “Handsome Squidward” from “Spongebob,” while another thought she looked like Ivan Ooze from “Mighty Morphin Power Rangers: The Movie.”

Gal Gadot wore a long-sleeve Givenchy dress with a lace top and flowing pink skirt. But not everyone thought “Wonder Woman” looked wonderful. One netizen felt she resembled a beaver character in “Birds of Prey.” Another thought it looked like someone “spilled pepto bismol” on the gown.

Gal Gadot was inspired by Bernie, the beaver's look from #BirdsOfPrey #Oscars pic.twitter.com/XOnMnmT0fY

Who spilled the pepto bismol?

Billie Eilish stayed true to her oversize style ethos on the Oscars carpet, wearing a black-and-white embellished boucle suit from Chanel. Many applauded the outfit, but some thought it missed the mark. One netizen called her stylist “bad” while another wrote: “Everybody is so glam, so classy, so dapper and sassy and then there is Billie Eilish.“

Everybody is so glam, so classy, so dapper and sassy and then there is Billie Eilish pic.twitter.com/2G3OCyOdAm

Penelope Cruz wore Chanel on the red carpet, turning up in a black gown with ankle-strap pumps. While the outfit made some best-dressed lists, others thought it didn’t quite work. “Worst dressed for me? Penelope Cruz. Not all couture is good couture. I won’t even post the pic of that god awful mess,” wrote one Twitter user.

Worst dressed for me? Penelope Cruz. Not all couture is good couture. I won’t even post the pic of that god awful mess. #Oscars

Like Cruz, Margot Robbie wore Chanel, choosing a vintage gown from the ’90s. While many fans loved the look, others weren’t into it. “Margot Robbie is so beautiful, that dress is doing her no favors,” one netizen said. Another felt it “aged her.”

Margot Robbie is so beautiful, that dress is doing her no favors. #Oscars

Maya Rudolph wore a sparkling orange Valentino gown with a boxy silhouette and pockets. The “Saturday Night Live” alum teamed the dress with strappy sandals. But fans thought the look wasn’t the most exciting choice. “maya rudolph: if it’s not one giant piece of fabric i don’t want it,” one Twitter user joked. Another netizen thought the gown resembled a Snuggie.

maya rudolph: if it's not one giant piece of fabric i don't want it pic.twitter.com/RJwYAccUZB

Maya Rudolph said “you can do my hair and make up but I’m not taking off the Snuggie” pic.twitter.com/dYuhMzxRib

See more celebrity arrivals on the red carpet at the 2020 Oscars.

Charlize Theron Wears All Black, Right Down to Her Pedicure, at the 2020 Oscars